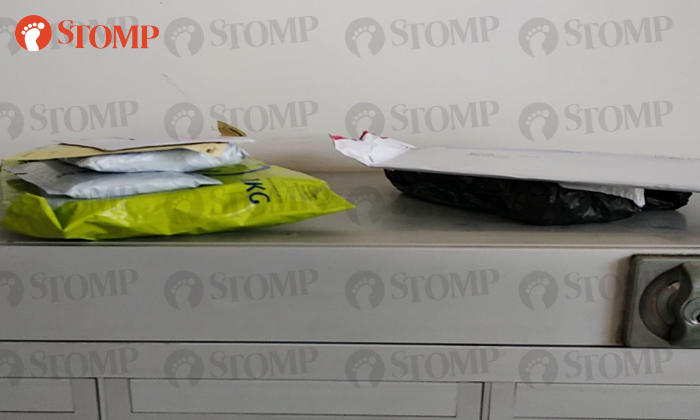 Stomper Dennis was concerned to see multiple packages and letters lying on the letterbox at his void deck at Block 591A Ang Mo Kio Street 51 last Tuesday afternoon (Sep 11).

The resident at the new Build-To-Order (BTO) block told Stomp he came across the sighting at around 2.55pm.

He also shared with Stomp two videos showing the letters and packages, including a SmartPac item, left on top of the letterbox.

Dennis said: "I do not believe that residents had left the packages there themselves as they all had different names and addresses."

Responding to queries by Stomp, a SingPost spokesman said in a statement on Tuesday (Sep 18): "We thank Stomper Dennis for his feedback.

"As part of the delivery process, our postmen would segregate the letters and packages before delivering them into the letterboxes.

"For this case, upon our further investigation, we suspect that the videos may have been taken while our postwoman was around the corner segregating or delivering mail at another section of the letterbox nest.

"That said, we will monitor the service quality of the area. Thus far, we have not received any feedback of missing mail from residents.

"We have also reminded the postwoman that she should take greater care to ensure that the mail is always within sight or secured during the delivery process."