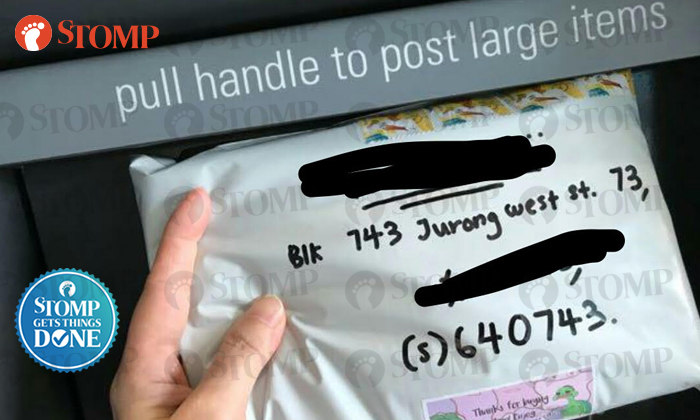 Stomper Kris was looking forward to receive two parcels containing purchases that she made on Carousell in mid-August, but did not get them even after nearly three weeks.

She said she had bought travel-sized beauty products from two Carousell users, who sent her photos proving that they had mailed out the packages from Redhill and Serangoon on Aug 12.

Kris, a resident at Jurong West 73, highlighted her predicament to Stomp in phone conversations on Aug 29 and Sep 3, after still not getting her parcels.

She also said: "The items in both parcels amounted to around $65.

"Both sellers have many good reviews on Carousell and sent me photo proof that they mailed out my purchases.

According to Kris, she contacted SingPost but was told that "items sent via normal mail service are unrecorded and untraceable in the system".

Following a Stomp query, SingPost said it has since located and delivered the parcels to Kris.

Kris also informed Stomp that she received her items from a postman at her door on Sep 4, at around 5.55pm.

Mr Robin Goh, Group Chief Brand and Communications Officer of SingPost, told Stomp in a statement on Tuesday (Sep 11): "We thank Kris for her feedback and apologise for the inconvenience she has experienced.

"We have located and delivered the two items that were posted in August to Kris.

"As these packages were sent by ordinary mail, they were not tracked and there is no item-specific information available for further investigation.

"Nonetheless, we will monitor our service in the area and have reminded our delivery staff to be more vigilant."

Expressing her gratitude to Stomp, Kris said: "The postman delivered the parcels to my door.

"The parcels were stamped with '14 August' so I'm not sure where they were in the past 20 plus days, but they have been found again.

"Thank you very much, Stomp, for your assistance!"