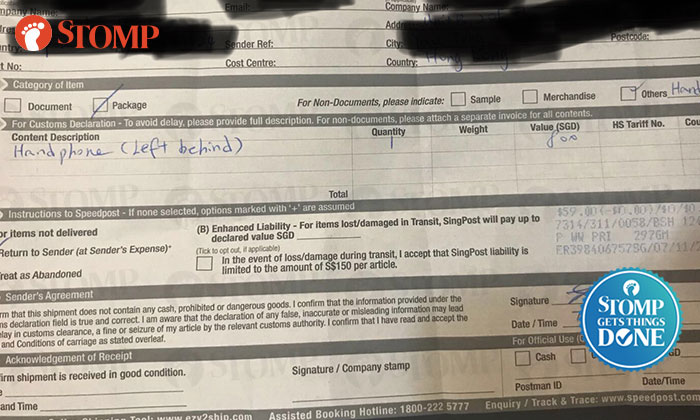 Stomper Denny, whose parcel containing an iPhone 7 went missing during delivery, has gotten a full compensation for his lost item and postage fees from SingPost.

Denny had shared his predicament with Stomp, who then contacted SingPost for more information.

Upon realising he had forgotten to bring his phone, Denny got in contact with his family and his mother subsequently engaged SingPost’s Speedpost Priority service on Nov 7 to deliver a parcel containing his phone to Hong Kong.

Denny said that his mother was told that it would take three days.

However, when he did not receive the parcel after the fourth day, Denny decided to check on his parcel via the online tracking service, which showed that the parcel was still in Singapore.

Next, he called the customer service hotline to ask if about the parcel and was told that 'it should be in Hong Kong'.

However, he never received it.

Over the next two weeks, Denny made repeated calls to the customer service hotline and was left dismayed by the non-replies he supposedly got.

Despite asking for an incident report from SingPost several times, he did not receive it.

On Nov 21, Denny’s wife, who was in Singapore handling the case on his behalf, was informed by SingPost that the parcel had indeed gone missing.

She subsequently received a claims form via her email, which she filled up.

According to Denny, under the value of the goods lost, his wife had filled in $800, plus an additional $59 for the cost of the Speedpost service that was used. This amounted to a total of $859.

However, the couple were later told that the postage was non-refundable and that the claims for the goods lost was capped at $150.

After a few calls to the customer service hotline, Denny discovered that his mother did not purchase the insurance for the package. As such, the compensation was capped at $150.

However, Denny said that his mother was not told about the insurance or the maximum amount claimable without it.

On Dec 22, after repeated rounds of talks, Denny was told that the postage fee would be refunded, but compensation would still be capped at $150, as his mother did not indicate that she had wanted to buy insurance for the parcel.

When Denny dropped SingPost a message on their Facebook page regarding the matter, he was told that his claims had been processed, even though he did not want to accept the $150 compensation.

In response to a Stomp query, a SingPost spokesman said: "We are sorry about Mr Denny Ho’s parcel which was lost in transit. Out of goodwill, we have provided him with full compensation and this has been accepted as satisfactory resolution.

"Our Terms and Conditions of service state that our liability of carriage is limited to S$150. This may be referenced on our website at http://www.speedpost.com.sg/customer-care/enhancedliability.html. We urge customers shipping high value items to purchase insurance to safeguard their interests.

"We are looking into the Facebook post cited by Mr Ho. As part of our social media policy, we do not hide or remove any posts unless the language used is profane or of a defamatory nature."

Stomp confirmed with a SingPost spokesman on Wednesday (Dec 3) that the full compensation of $859 -- $800 for the item and $59 for the postage fees -- was paid out.

Related Stories
Cat trapped in letterbox set free with help from Bukit Batok residents, SingPost and Police
Sengkang resident frustrated to find package damaged after it was forced into mailbox
Why is Mr Postman cramming large packages into my letterbox?
More About:
SingPost
complaint
parcel
Stomp gets things done