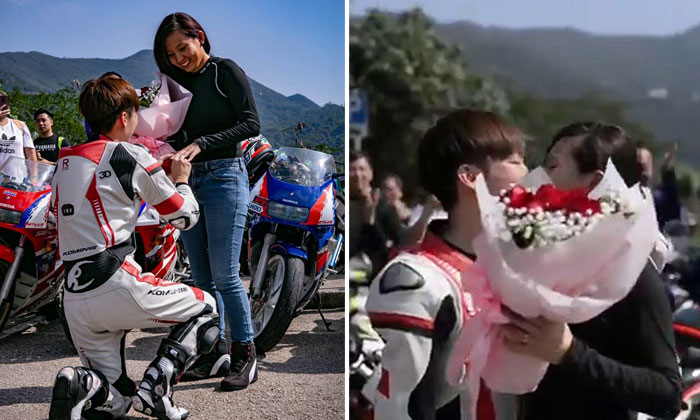 If you have watched Andy Lau's Moment of Romance, you will remember the famous bike-riding scene at the end of the movie.

This served as inspiration for Jackson Chan, who proposed to his girlfriend of nine years in front of over 140 friends and motorcycle enthusiasts on Feb 7 in Hong Kong.

Jackson posted a video of him proposing to his girlfriend Zen at a carpark in Clear Water Bay on his Facebook page on Tuesday (Feb 19). It has since garnered almost 10,000 views.

Jackson told Stomp in a phone interview that the proposal took half a year to plan and involved him travelling to Hong Kong prior to the proposal to organise the riding tour that included over 80 classic motorcycles.

The 32-year-old has been riding with the same group of motorcycle enthusiasts since 2012 and told Stomp that on top of being able to speak Cantonese, he vibes well with the group because they have a common love for riding.

"My friends arrange a ride around Hong Kong's countryside every third day of the lunar new year to mingle and showcase their bikes," he said.

"I thought it would be the perfect opportunity for me to do the proposal there."

His friends also helped to source for and lend him two classic bikes for the occasion.

He rode a rare Yamaha RD500 while his girlfriend rode a Yamaha R1Z250.

When asked if he felt nervous before the proposal, Jackson confidently replied, "I wasn't nervous at all.

"This is my world.

"All the people there are friends who know me so I was very comfortable.

"My girlfriend was kind of shocked though."

Jackson was relieved when Zen said yes and they celebrated by having lunch at a restaurant nearby after the proposal.

The lovebirds first met nine years ago when Jackson gave Zen a ride on his motorbike when she was working at his friend's company.

They applied for a Build-To-Order (BTO) HDB flat in August last year.

"I think a proposal is necessary and this is what I can give her," he said.

He told Stomp that they plan to get married in a year or two.

Related Stories
Li Chen puts a ring on Fan Bingbing's finger on her 36th birthday
Singaporean woman once reported missing after going Romania to look for BF has married him
Couple's wedding photos show what it's like being together forever
More About:
motorcyclist
motorcycle
romantic
proposal
Hong Kong
couple
love