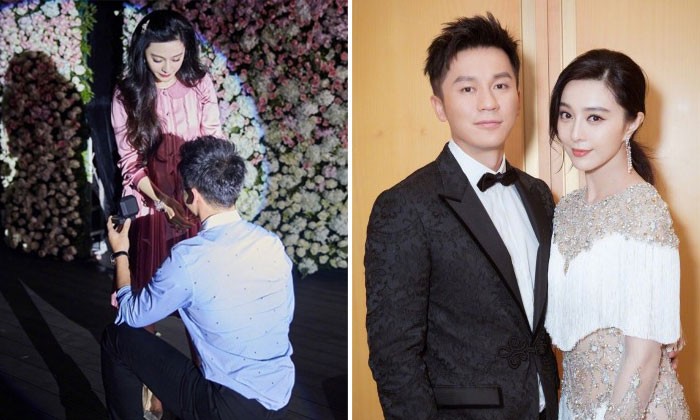 He has finally popped the question.

Against a sea of pink roses, Li Chen got down on one knee before Fan Bingbing and slipped a ring onto her finger during her 36th birthday party.

The 38-year-old Chinese actor shared the good news on his Weibo page in the early hours of Saturday (Sept 16) with the accompanying caption: "Us, forever..." that was later echoed by "Forever, and ever" on his fiancee's Weibo page.

According to Chinese media reports, the proposal took place at an intimate dinner party filled with pink and white blooms as well as six fondant cakes decorated with Fan's favourite cats.

During the proposal, Li also presented Fan a bride doll made in her likeness.

He reportedly spent four months convincing Canadian artist Marina Bychkova to agree to the custom order by sharing Fan's photos and videos, as well as sharing the couple's love story.

Fan wrote on Weibo the following day: "I feel that my life is complete. I don't want the stars in the sky, just happiness in life. I am very blessed."

In her post, she also thanked those who gave the couple their blessings.

It was a great week for the actress at work too, as she had just clinched Best Actress award for her role in I Am Not Madame Bovary at 31st Golden Rooster Awards.

Meanwhile, some sharp-eyed netizens started discussing the size of the sparkler on her ring finger at the awards show. But it is not clear if that was her engagement ring.

Last year, Fan dropped hints that Li was husband material when she said in a Taiwanese talk show that he would be her last boyfriend.

The couple was reported to have fallen in love while filming the TV series The Empress of China in 2014. And ever since Li and Fan announced that they were dating in May 2015, there have been numerous rumours of the couple getting engaged.

There's no word when exactly they'll be getting hitched, but many people are expecting the celebrity couple to hold a grand wedding.