Woman's ex-BF started showing up wherever she was: 'I constantly felt haunted' 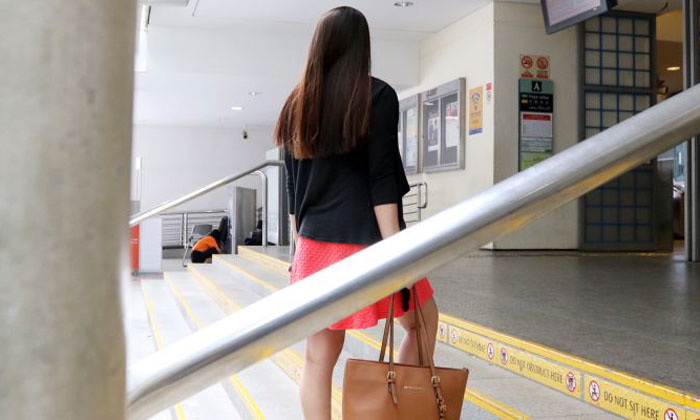 She thought it was a mere infatuation.

Until she felt threatened.

Ann (not her real name), an administrative assistant in her 20s, was stalked by her ex-lover for over a month after their break-up in July.

Ann told The New Paper she constantly had to look over her shoulder because she was worried he was following her.

She said: "It started less than a month after our break-up. He started appearing when I didn't reply to his text messages."

She did not realise the seriousness of the situation until she noticed him lurking at the places she hung out.

She said: "I had checked in at a nail salon on Facebook and after I finished my manicure session, I saw him nearby.

"That was when I realised he was really following me everywhere and was checking on my every move."

Ann is a victim of unlawful stalking, which is defined as entering or loitering in any public or private place frequented by the victim, or the victim's place of residence or business.

Unlawful stalking and other harassment offences come under the Protection from Harassment Act (POHA), which was enacted in November 2014 to strengthen harassment laws here.

Since the Act was enacted, there have been 222 applications for protection orders. Of these, at least 76 were granted.

Lawyers The New Paper spoke to confirmed they are seeing an increase in clients seeking help due to harassment and unlawful stalking.

Association of Women for Action and Research (Aware) said it received reports of 150 cases of harassment so far this year, and most of them involve stalking.

After the incident at the salon, Ann stopped revealing her location on social media, but it was not the end of her nightmare.

The ex-boyfriend also threatened to leak an obscene video of the two of them and spread rumours that she had an abortion.

He then began showing up near her home.

Ann said: "My mother was hanging the clothes out to dry when she spotted him at the next block.

"I constantly felt haunted. I didn't feel safe at all."

For the next three days, Ann ordered McDonald's delivery for food because she was afraid of bumping into him. She also got her friend to drive her around if she needed to go out.

She said: "My worst fear was that he would come into my house and kill me."

Ann said: "My ex's love turned into an obsession."

After days of being cooped up at home, she finally decided to seek help from the police.

Ann said: "They told me it was harassment, but they advised me to seek legal help in applying for protection orders instead."

Her ex-boyfriend stopped following her after he found out through mutual friends that she had sought help from the police.

TNP understands that the police often request for victims to seek legal help as it cannot take action unless there is a court order.

The police step in depending on the circumstances - there is a higher chance of intervention if there is criminal intent or the actions are life-threatening.

But the price of seeking legal means was an obstacle for her.

Ann added: "I think love turned into an obsession. Although he has stopped after knowing I went to the police, I still wish I had taken action earlier."

Stalking is not just following someone. It encompasses a wide range of acts, said Ms Jolene Tan, head of advocacy and research at the Association of Women for Action and Research (Aware).

- sending communications to or about someone

- entering or loitering at their home, workplace or anywhere else they frequent

- interfering with their property

- sending unwanted material (such as gifts and flowers)

- keeping them under watch.

Ms Tan added: "Even a one-time act, if it is sufficiently serious, can constitute stalking."

Aware said they had received reports of around 150 cases of harassment so far this year.

Ms Tan said the enactment of the Protection from Harassment Act suggests that harassment and stalking are being taken more seriously by the authorities.

She said: "It is also a sign that our society is gradually recognising harassment and abuse as acts that go beyond physical violence."

WHAT CAN VICTIMS DO?

Under the Protection from Harassment Act (POHA), victims of stalking have both criminal and civil remedies.

For criminal remedies, they can make a police report and/or make a Magistrate's complaint at the State Court to seek redress for the offence committed. A police report can also be made online through the Singapore Police Force website.

This will get the perpetrator to stop further harassment​ or ​stalking, and can, for example, stop​ the stalker from contacting ​the victim or ​have online posts taken down.

Victims who can get a lawyer can also sue a harasser or stalker for monetary compensation.

If the harasser or stalker is a family member, they can also seek a Personal Protection Order from the family court under the Women's Charter.

Lawyers The New Paper approached say they have seen an increase in cases of stalking.

Mr Alfred Lim, a director at Quahe Woo and Palmer, has also seen an increase in stalking cases.

He said: "Although the firm does not keep track of the number of cases, I have personally received more queries from clients and victims trying to understand how they may utilise the Protection from Harassment Act (POHA) to protect themselves from harassers or unwanted attention."

The proliferation of social media has also resulted in an increase of cases and the law is designed specifically to make acts of cyberbullying and online harassment a criminal offence.

Previously, victims of stalking would have to seek protection under the Miscellaneous Offences Act.

Ms James said: "The POHA serves an important purpose to plug the gaps in the old law. In the past, stalking was one of the many offences under the Miscellaneous Offences Act and it doesn't cover online stalking and doesn't cover people from overseas jurisdiction.

"In the past, if a person was living in US but was stalked online by someone here, the victim had no power to protect himself or herself."

Now, under the POHA, they do.

But Ms Sofia Bakhash from Lexcompass said the onus would be on the victim to provide evidence before a court order can be issued. This could include text messages, closed-circuit television footage, or involve hiring a private investigator.

Many victims are turned off by the process, said lawyers.

Ms Sofia added: "A significant amount of cost can be involved, and meanwhile, the stalking could still continue."

Related Stories
University of Washington's 'popular' student murders ex-GF and 2 friends after breakup
'I'm terrified my ex-BF will harass me once again -- even though I'm married and have a kid'
Chinese couple holds divorce ceremony to announce break up
More About:
stalking
relationship
relationships
ex-boyfriend stalks woman
break up