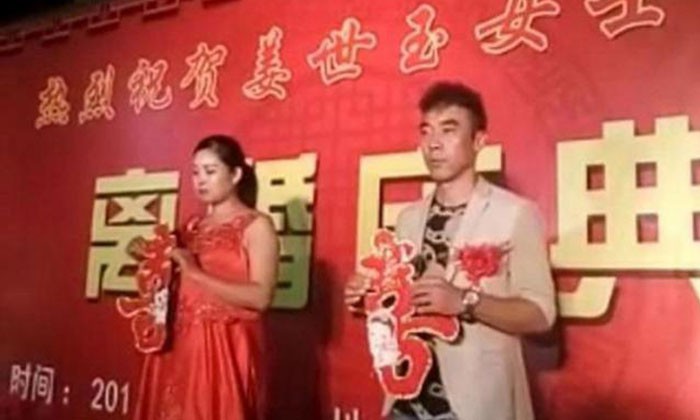 Getting hitched in China, and just about everywhere, is often a joyous affair, usually complete with ceremonious proceedings in various shades of red.

The colour red, which symbolises prosperity and fortune, is used in many traditional Chinese festivals.

So it came as a bold statement when a Chinese couple from Shandong, held a divorce ceremony to announce the end of their marriage,

Chinese daily Lianhe Wanbao reported. Just like a wedding, friends and relatives gathered to witness the proceedings, albeit in a more muted way. The couple even held one-half each of the Chinese character cutout "Double Happiness", which is usually used at weddings.

While getting a divorce is typically frowned upon in China, this couple had no qualms about publicising it. In fact, one photograph showed a massive red arch built over a road, with a celebratory message congratulating the couple on their divorce.

Attendees and some netizens say that the ceremony was an eye-opener, and that they had nothing but respect for the couple on their decision to end the marriage

However, other netizens criticised them for celebrating a sad event. One even cheekily exclaimed: "We give red packets during weddings, so do we get a refund during divorces?"

Related Stories
Together forever? Why couples choose to wed on Jan 7, 2017
Worst things that can happen at a wedding -- according to these confessions
More About:
Wedding
divorce
couple