Who's in the wrong? Old lady and young man argue on SBS bus -- kicking and spitting at each other 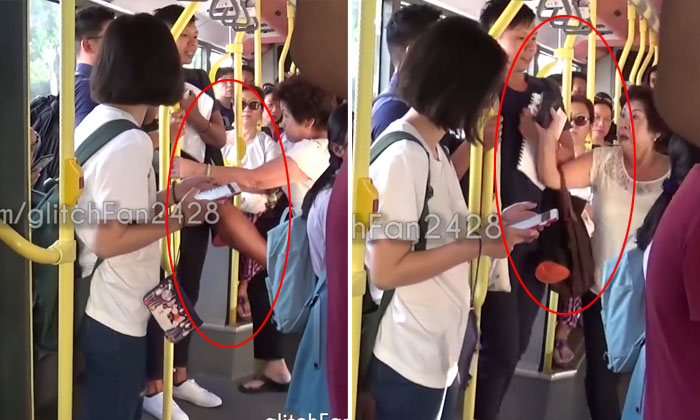 How would you react if someone started scolding you for no reason and attempted to assault you on public transport?

Enraged? Self defense to protect yourself?

The short over-a-minute video features an old lady and young man getting into a heated argument on an SBS bus -- kicking and spitting on one another.

It is to note that this video was recorded several months back -- which means this incident took place sometime in 2016.

While it is unclear why the two got into an argument, the video starts with the old lady scolding a young man in a blue button up, calling him smelly.

The young man shoots back with a snide remark, saying that he smells great.

Annoyed the old lady decides to move closer to the door, and while she's at it, the young man calls her an "old lady" in dialect. Offended, she turns to hit the young man, asking him, "and you're not old?", in a rather aggressive manner.

She continues to hit him with her hand, and he decides to fight back by kicking her.

This is when the other young man steps in between to stop the fight. But the old lady aggressively decides to kick the blue buttoned up young man she was angry with.

Several other passengers are also seen trying to make sure the fight does not escalate any further, and the duo then takes to spitting at each other instead.

Even the bus driver can be heard telling the angry young man to stop spitting on the bus, and to leave the old lady alone.

The old lady continues to nag despite all this. The young man who is seen standing in between the angry duo is seen telling her to stop arguing as everyone is waiting for her to get off her stop.

Two Stompers have shared with us their thoughts about the incident.

"Both are at fault. Aunty started by "being honest" if he was really smelly. If not, she was also wrong on accusing other people. However the young man is also in the wrong since he doesn't know how to be more understanding/lenient towards old people."

"The old lady definitely needs to be taught a lesson. The kid could avoid the situation. What about the bus driver? He has a responsibility too. In US the bus Captain has the right to stop the bus and ask both passengers to go down."

Who do you think is at fault?