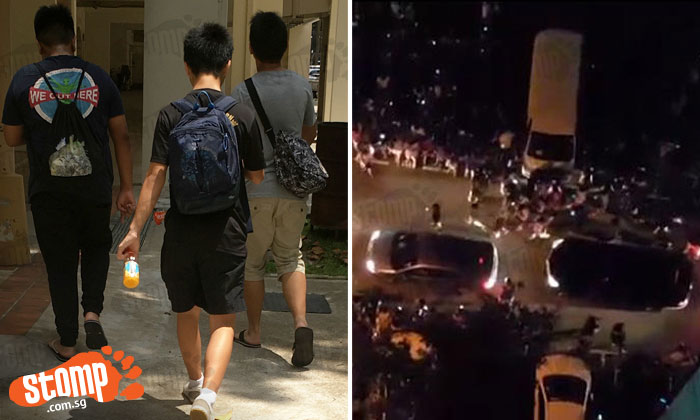 Two men, aged 28 and 33, have been arrested after getting into a fight over Pokemon GO on August 14.

According to The Straits Times, police received a call about a dispute between a car driver and a pedestrian at the car park entrance of Plaza Singapura.

The pedestrian was reportedly playing Pokemon GO on his phone while crossing the road when the car driver blasted his car horn at him.

A dispute ensued where the two exchanged blows.

Stomp has reported on the huge crowd gatherings at PokeStops recently like at Hougang Avenue 10 where players were seen jaywalking and even running across the road without apparent care for traffic.

Stomper Lin informed Stomp of a trainer who had challenged her father to call the police after refusing to give up a parking lot meant for residents.

Residents have also complained on trainers making a lot of noise during these night gatherings.

Since then, police officers have been seen patrolling the area frequently, especially at night.

The Singapore Police Force Facebook page posted a notice to players of the popular game:

"While you ‪#‎CatchEmAll‬, please do not endanger your life or personal safety, or cause inconvenience to those around you.

"Stay safe and take note of the following:

• Be aware of your personal safety when out looking for Pokémon. You should play in pairs or as a group to ensure your personal safety.
• Watch where you are walking, be aware of your surroundings and do not walk out onto roads without looking.
• Do not play the game and drive any vehicle or ride any personal mobility device at the same time. You cannot do both safely.
• Do not trespass onto restricted areas and private properties. Do not take pictures of restricted areas.
• Be aware that you are potentially sharing data with others; there could be potential criminals who may seek the opportunity to lure victims to their fake “Pokéstops”.
• Educate your children to stranger-danger at “Pokéstops”.
• Never reveal your personal information and watch out for fake apps or cheat tools. Cyber criminals can access your personal data to commit fraud or hack into your phone with viruses and malware."

Related Stories
Pokemon trainers occupy parking lots at Hougang Ave 10: One even challenges resident to call the police
Chaos ensues at park in New York after Pokemon Go players heard a Vaporeon was nearby
More Pokemon Go madness at Hougang and Toa Payoh: Trainers dash across road and make a lot of noise at 1am
Sea of Pokemon hunters storm across road Hougang Ave 10 to Punggol Park, blocking oncoming cars and buses
Seriously guys, the game is not worth your life! 'Crazy' crowd near Block 401 in Hougang rushes across road to catch Pokemon
More About:
pokemon
dispute
arrest
fight