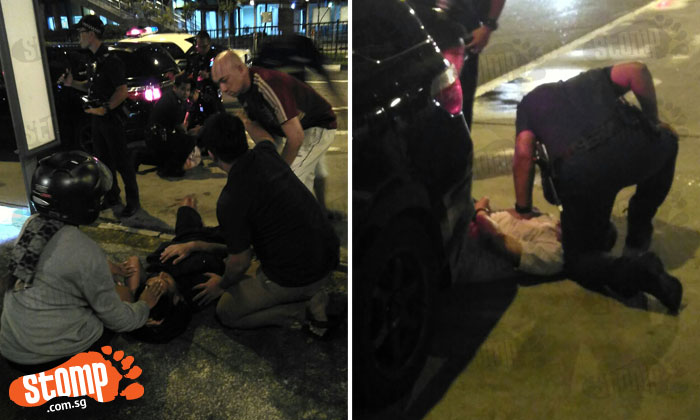 A 21-year-old man was slashed following a dispute with a 59-year-old man at a bus stop in front of Block 159A Rivervale Crescent yesterday (Sep 1) at around 9pm.

Stomper 13seagle was on his way to dinner when he came across the scene and saw a man lying on the ground.

The Stomper found out from bystanders that a dispute had occurred between a taxi driver and another driver.

He recounted what he saw to Stomp:

"By the time I was there, the cabby had been subdued.

"The man wearing black had his chest covered with clothes but his belly was exposed and I could see blood trickling down.

"He was being attended to by two to three bystanders before the paramedics arrived on the scene.

According to bystanders, one of the men was slashed and the weapon had apparently fallen into a drain by the side of the road.

A police spokesman provided Stomp with the following details:

"Police received a call on September 1 at around 8.27pm requesting for assistance along Rivervale Crescent."

"Upon arrival, it was established that a cae of voluntarily causing hurt with dangerous weapons had occurred.

"A 21-year-old man was conveyed conscious to Changi General Hospital.

"A 59-year-old man was arrested in relation to the case.