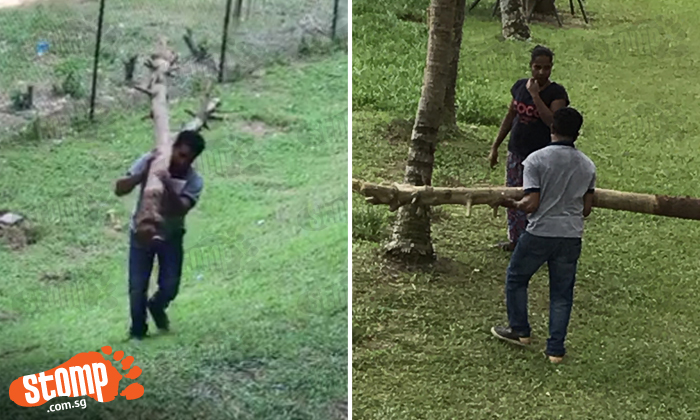 Stomper JD noticed a worker from the Town Council removing his neighbour's 'illegal plantation' yesterday afternoon (Jan 9) at around 3pm.

It is unclear where the incident happened, but a video from JD shows workers carrying away tree logs from a grass patch.

JD then approached the workers and asked them about a row of potted plants outside his block as he was concerned about them, though it is unknown if they belonged to the same neighbour.

However, this caused the neighbour to misunderstand and assume that JD was the one who reported her to the Town Council, hence leading to a dispute.

"I was just looking out of my house at 3pm. There was an immigrant worker from the Town Council plucking out all illegal plantations from the government property which was a small garden. The whole illegal plantation belonged to a lady.

"So I was clarifying my doubts regarding some pots which were directly down my house and had attracted a lot of insects such as mosquitoes to breed.

"There were so many mosquitoes till the point that they entered my house and even left some bites on my kid's body. She is just one year and five months old, and due to that, she fell ill.

"I even took her to the Polyclinic to consult the doctors and they claimed if the fever prolonged, it might be dengue fever or any other sicknesses.

"So the immigrant worker told me that the potted plants weren't supposed to be here and if they belonged to that lady, she should place them outside her house.

"He also told me that the Town Council had already removed them before but she insisted on growing her own plantation.

"Therefore, I went down to take a look at the plants and also snapped few pictures to email Town Council because these are serious matters and I don't want it to affect my daughter, causing her to fall ill.

"I don't care about her plantation as it's her problem.

"But what happened was that the lady saw me talking to the immigrant worker and actually thought I had reported her, causing them to take away her plantation, which is just plain assumptions by her.

"She went on shouting at the top of her voice using vulgarities and inappropriate words. Then she verbally attacked my sister and mother-in-law who were beside me during this incident.

"The argument became worse and to avoid bigger situations, I called the police and the police took ours and her report.

"But they advised her to remove those stuff too and said that they would get back with the Town Council's statement on which plants can be allowed at which location and left.

"The lady brought her husband up to my house and stood outside my house, speaking so loudly and creating a scene and questioning me.

"When I voiced out, the wife shouted at me asking me to be quiet as she wasn't interested to speak to me, so I told them not to talk and walked off.

"Then the husband and wife were speaking to my husband's grandmother. The guy said he was a fighter and to see what will happen if we tried to come down and accuse his wife.

"He spoke so loudly and boldly, which looked bad to the other neighbours.

"I'm also going to report them for coming up to my house and behaving in such an inappropriate manner.

"I don't ever wish to see her and any of her family members coming up to the house and speaking to those who aren't involved in this problem, and also to prolong this.

"I've already spoken to the police and said I don't care about her or her plantation. I just want the pots to be removed and shifted near her house, instead of putting them directly down the drain which is not even near her house and causing mosquitos to form."