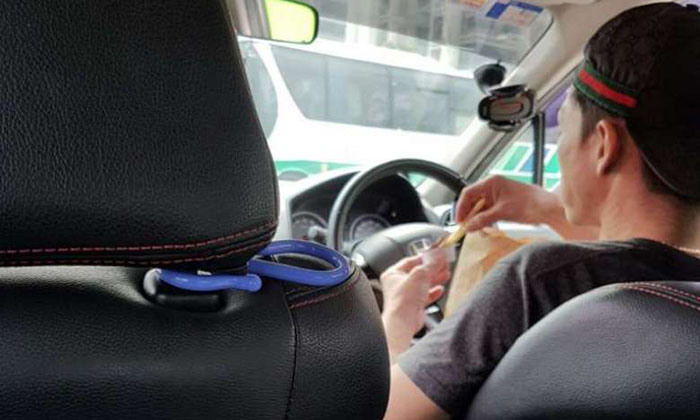 A Uber driver has taken UberEATS way too literally, and possibly landed himself in hot water.

With driverless cars all the rage now, one Uber passenger certainly felt like she was riding in one, when the driver of the car she was in allegedly controlled the steering wheel with just a pinky during the ride as he ate his food.

According to Lianhe Wanbao, a reader identified as Ms Xu, 48, was taking a Uber trip from Pasir Ris to her workplace in Toa Payoh, at around 3pm on Wednesday (Dec 15) when it happened.

"As soon as I boarded, I could smell the oily fast food," she told Lianhe Wanbao, "I asked the driver to wind down the windows, and he even asked me 'why?'."

She said the driver held a sauce box in his left hand and picked up fries and chicken nuggets with his right, while driving through the entire 20-minute journey, only holding the steering wheel with his left pinky.

While she could understand if the driver ate whenever the car stopped at red lights, as he might be so busy he did not have time for meals, she was appalled that he was doing so even while on the expressway.

"It was really dangerous. What if something had happened? He definitely would not have had time to react," Ms Xu said, who added that she was frightened throughout the journey.

As she did not want to confront the driver directly, she took a video to lodge a complaint with Uber. She added that she felt like she was onboard a driverless car.

"At some point, some sauce dripped onto his pants, and he momentarily took both his hands off the wheel to pick up some tissue and wipe off the mess. It was really outrageous," Ms Xu told Lianhe Wanbao.

According to Lianhe Wanbao, Uber has apologised to Ms Xu, and will investigate the matter and take appropriate action against the errant driver.

Related Stories
Grab driver who's clueless about GrabShare promo refuses to take passenger to destination
2 women use Uber to move house in Yishun -- but driver brings them to police station at Ubi
How not to have accidents? UberEATS riders hold up traffic in middle lane of Cecil St
Uber driver bragged about drinking and refused to let passenger out of car unless she gave him her number
inconsiderate
uber
controversy
shocking
bizarre