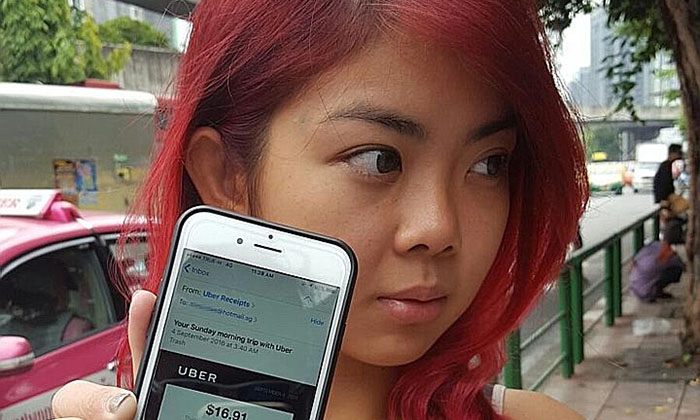 Ms Nicole Lee was hanging out at Clarke Quay into the early hours of a recent Sunday when she decided to book an Uber ride to her home in Clementi.

The journey took just 30 minutes but it was a "horrifying" ride, said the trade publications editor.

Soon after getting into the car, the Uber driver bragged that he had been out drinking before he picked her up at 4.12am.

Despite repeated requests by Ms Lee, 23, to be let out of his car, he insisted on going ahead with the trip. He kept offering to take her to a house party, and also asked her out to supper.

He later asked for her phone number and would not let her out of the car at her destination until she complied.

Private-hire car service Uber confirmed with The Sunday Times last Monday that the driver - who it has not named - has been suspended and investigations are ongoing.

This month, Uber also suspended another driver, apparently over a passenger complaint that he had allowed someone else to ferry passengers using his account. Uber said it could not reveal details of either case, due to privacy policies between drivers and passengers.

Mr Leigh Wong, Uber's head of communications for Singapore and Malaysia, said: "Our standard operating procedure in these instances is to wait-list the driver's account, then pending an investigation, to address any issues accordingly."

Ms Lee, however, wants to know how the driver will be dealt with, and if he will be "blacklisted".

Recounting the events of that morning, Ms Lee said she continued with the ride as she thought the driver - who looked to be in his 20s - was just showing off about his drinking habits and he also appeared to be able to drive well.

But she said her fears that he may have had too much to drink were revived when they approached a police roadblock near Ngee Ann Polytechnic at about 4.30am. "He panicked and told me - 'I cannot take the (breathalyser) test'. At the roadblock, he told the police that he was an Uber driver and was taking me home. They let him pass," she said.

Ms Lee said he later asked for her phone number and refused to let her out of the car unless she complied. "At that point, I was quite eager to go home, so I gave it to him," she said, adding that she wanted to elicit a "confession" from him later that he had been drinking.

In a WhatsApp conversation Ms Lee showed to The Sunday Times, the driver replied "200 for 2 towers or one bottle of Chivas", when she asked him about his drinking.

The Sunday Times tried but could not contact the driver. In the Uber app, drivers and passengers are known to each other only by their account names, which may not be their real names.

When asked by The Sunday Times, Uber did not say how many drivers it has suspended.

Grab, the other major player in the ride-hailing industry here, assured commuters that terminations made up a "very small percentage of the total number of Grab drivers".

"We investigate all complaints or reports of errant drivers, and then carefully consider, against our promulgated code of conduct, the best action to take... Errant drivers will be penalised with actions ranging from warnings to suspension," said Mr Lim Kell Jay, head of Grab Singapore.

Ms Lee said she will still use Uber. "Because it's cheap, I'm still taking Uber. But now I stay off Uber past midnight and will take a taxi, since it's properly licensed," she added.