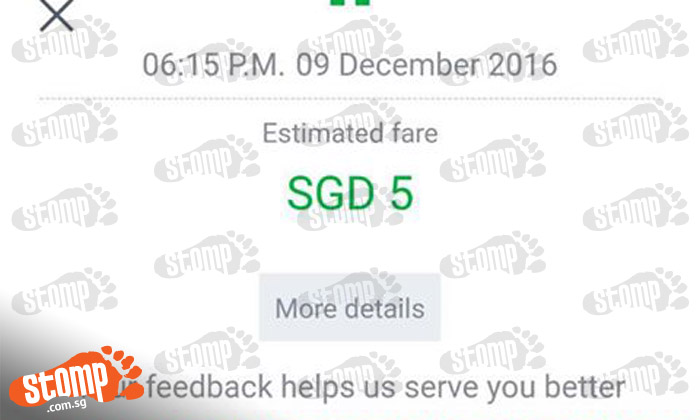 Stomper C was left fuming mad and worried after a GrabCar driver left her stranded at a bus stop in Punggol Road at about 6.10pm on Dec 9, because he allegedly did not understand how GrabShare works.

The Stomper's boyfriend told Stomp that the GrabCar driver had picked her at Compassvale Bow.

Less than 30 seconds into the trip, he allegedly started complaining about getting $5 trips the whole day (GrabShare promo) and not able to earn.

"I ignored his silent grumblings as he drove us towards Punggol Road. Shortly after, he received a call from, (I figured from his conversation), the second passenger who was supposed to share the trip," C said.

According to the Stomper, the driver started shouting into the phone and asking the caller who is he, where is he, and after much confusion, exclaimed that he didn't know about such booking and hanged up on the call.

"It was then that he suddenly realised that he was supposed to pick up a second passenger but did not."

So the driver allegedly pulled over at a bus stop along Punggol Road, saying he needed to check which location the other passenger was at.

"Okay, so we stopped there for a minute while he checked the phone. He looked to be having problems with the app and was mumbling complaints throughout," said C.

"Especially on the $5 fare promo and how the trips are only a waste of time and money.

The driver allegedly got frustrated after some meddling and suddenly burst out loudly that he is not taking the trip anymore.

"I tried explaining to him that yes, passengers are charged $5 as promotion but Grab would be reimbursing drivers separately.

"However he refused to listen, saying that he don't know and doesn't care and will not be sending me to Sembawang for a miserable $5."

Feeling that this was ridiculous, C confronted him, saying that he has accepted her booking on the Grabpromo, and that she had already boarded so he was obliged to send her to my destination.

"But he still he refused and insisted that he will not continue the journey. I was appalled by what was happening, by such rudeness and irresponsibility displayed by a private service provider."

Seeing that he had no intention of honouring the trip, C alighted with a clear mind to report this incident immediately.

"However, the hotline 65703925 was a dead line which I can't even get connected to. Then I received the e-receipt charging me $5 and the driver had left.

"So I was charged for a trip that was not completed, left upset and abandoned at an unfamiliar road, running late for my appointment and yet having to waste more time waiting for another driver."

C said that though the next GrabCar she booked arrived quickly, it took her more than an hour in total to finally reach Sembawang.

"Not only time wasted, but money too as I have just utilized my second limit redemption of the GrabShare promo (once in the morning) and having to pay for a full fare ride back to my destination."

"This episode has caused me great inconvenience, unhappiness, and more so, unnecessary trouble to have to report this in writing.

"Not just on the service attitude of your drivers, but also on the problem of those drivers having no proper knowledge or guidance on Grab services to be on the road fetching passengers.

"Although Grabshare is a new option released only recently, I trust you would agree that drivers themselves should at least understand how this new service works and be aware of the promotions that was rolled out.

"It is unbelievable that someone like Mr driver above be allowed to fetch passengers on GrabShare without even having the basic knowledge!

"And his attitude especially leaves much to be desired. I mean, chasing passengers off the car, seriously?

"Plus the fact that he has no idea there are incentives given for every GrabShare trip on top of the $5 promo fare?

"Even though is a small amount, I think the community should not be afraid to stand up and lodge a complain to a driver who took the money but did not deliver the service."

Related Stories
2 women use Uber to move house in Yishun -- but driver brings them to police station at Ubi
How not to have accidents? UberEATS riders hold up traffic in middle lane of Cecil St
Uber driver bragged about drinking and refused to let passenger out of car unless she gave him her number
Grab driver refuses to take passenger to destination
GrabCar