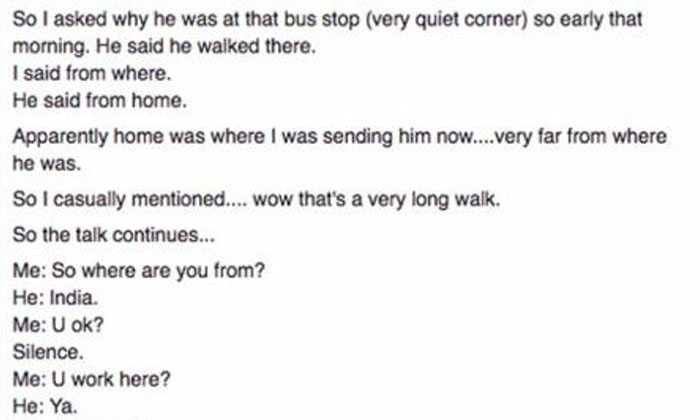 STORY OF A FOREIGN WORKER

The story was told by 33-year-old Cassandra Tan, who drives for ride-hailing service Grab in her free time. According to the mother of two, she received a booking from Bukit Timah Road last Sunday at about 6am.

As the reservation did not include an exact address, she decided to give the passenger a ring. Eventually, she found him sitting alone at a bus stop "looking around aimlessly".

It turned out that the man, who had been working in Singapore for about six months, had just received news that his wife had died during childbirth. Not only that, the man had apparently promised to hand their child over to another family when she turns 12 in order to raise money for his wife to visit the doctor during the pregnancy.

When his wife died, the family had turned up to claim the baby.

"This man sitting next to me will never have the chance to see his baby girl or even put his wife to rest," she said in her post, which has had more than 15,000 likes, comments and shares.

Ms Tan, who manages a dessert cafe in Stirling Road as her day job, said she declined to take his fare and even wanted to give him money for a ticket home.

Hours later, after she had finished her shift, she discovered $20 in a slot on the passenger door.

She believed the man she dropped off earlier had put it there.

Concerned about his well-being, she tried to call him numerous times. She found out the next day that he had been sent home after another worker picked up the phone and explained what had happened.

Ms Tan told The Sunday Times that the post was meant to highlight the difficulties that many foreign workers face in making their way to Singapore to find work.

"Having lived abroad for 10 years, I know what it's like being away from my family. I have the luxury of seeing them whenever I want, but these workers do not," she said. "The workers have to take a loan to come here, earn a low wage and do the jobs most Singaporeans won't do."

But the story doesn't end there.

Many netizens have voiced their support for Ms Tan's actions, and some have even stepped forward to volunteer time and money to help the foreign worker. So far, Ms Tan has refused to provide further information about her passenger in order to protect his privacy.

Her refusal to do so has provoked the ire of some, who questioned her story. Some Facebook users have even gone as far as to ask her for details such as her car licence plate number so they would be able to pose as her and obtain the passenger's records from Grab directly.

"But I'm sticking by my principles and I haven't been very nice to these people," she said. "I shared the story so people would learn to appreciate what they have, and recognise how much sacrifice these workers make. It is certainly not meant to attract attention."

While the demonetisation of India's 500-rupee and 1,000-rupee banknotes to reduce corruption has caused a stir in the markets, it's the new 2,000-rupee note that is now making waves online.

The hashtags #Demonetisation and #blackmoney are trending on Twitter, as people question the effectiveness of battling corruption by invalidating the high-denomination currency notes, then introducing an even higher-value one.

One such video, posted by YouTube user Technology Redefined, has garnered more than 1.1 million views.

The popularity of such videos prompted India's Economics Affairs Secretary Shaktikanta Das to announce that the colour loss was "normal" as the notes were new. In fact, he said that if a note did not lose colour, that was a sign that it might be fake, several news outlets reported.

Another issue that cropped up was swirling rumours on social media that the new notes were embedded with nano GPS (global positioning system) chips. The claims are that the chips are so powerful that they can be detected even at 120m below ground level.

And if too many of the notes are kept together, an alert would be sent to the government. The Indian authorities have swiftly dispelled the notion that such chips exist.