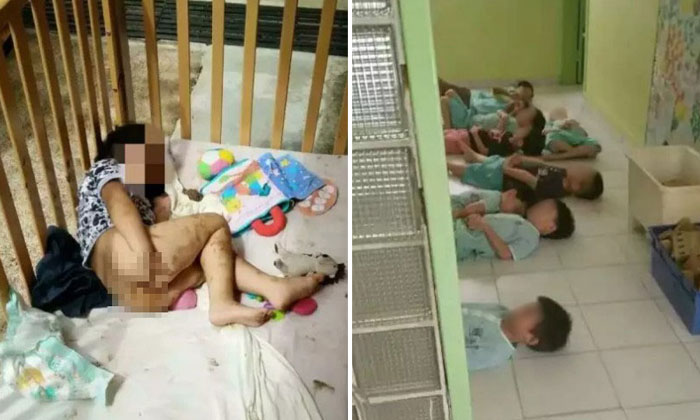 Stomper May alerted Stomp to photos circulating online of children allegedly being ill-treated at a childcare centre in River Valley.

An anonymous netizen posted the photos on WeChat on Feb 14.

The photos included that of a bare-bottomed child who had defecated and had faeces smeared all over his body in a cot.

The netizen wrote in Chinese that the child had even 'dug' out the faeces from his butt and eaten it.

Other photos showed the children lying on bare floor tiles for their nap without any mats or padding.

The netizen also claimed that the children were fed rotten fruit and alleged that the teachers threw away milk powder that parents had left the staff to feed their children with.

A police spokesperson who responded to Stomp's queries confirmed that a police report has been lodged and that the police are looking into the matter.

"The ECDA is aware of the post on social media, and is currently investigating it.

"The safety and wellbeing of children in child care centres are of utmost importance to ECDA.

"Under the Child Care Centres Act, all child care centres are required to meet the stipulated regulatory requirements to protect the safety, wellbeing and welfare of children in centres."