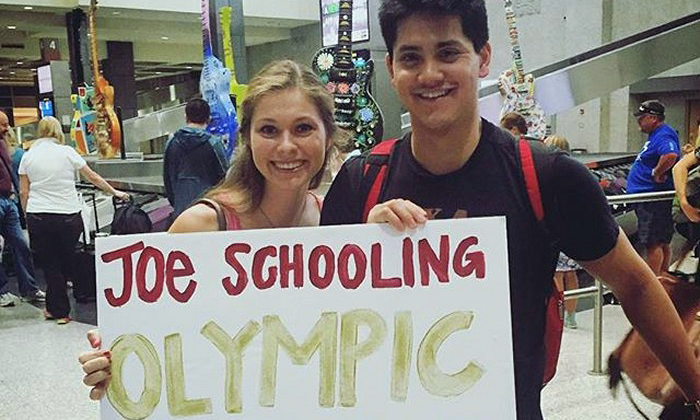 Olympic swim champion Joseph Schooling is back in Texas after week-long public celebrations and Parliamentary recognition of his legendary feat at the Rio Games 2016.

Casey Shomaker, a Texas law student who has been linked with the gold medalist, was at the airport to welcome him home with a sign that said "Joe Schooling, Olympic Champion".

She also posted an Instagram photo of the two of them at the airport on Aug 20 and said, "So good to have this one back! Thanks for taking care of him, Singapore!"

In response, a fan commented, "Please take care of Joseph on behalf of Singapore!!!"

Schooling, 21, is resuming his training and studies at the University of Texas in Austin after making history with a record timing of 50:39 in the 100m fly at the Olympic Games.

Shomaker is a 22-year-old fellow student whom netizens believe is the athlete's girlfriend.

Fans have been calling the duo a match made in heaven, especially after finding out that Shomaker is brainy and an avid sportsperson too.

Related Stories
Crowds cheer as Joseph Schooling goes on victory parade around Singapore
While you are checking out Joseph Schooling's biceps, take a moment to admire his cool new Olympic tattoo as well
Men chant his name, girls scream for him and one air stewardess even calls him handsome
More About:
Joseph Schooling
couple
olympics