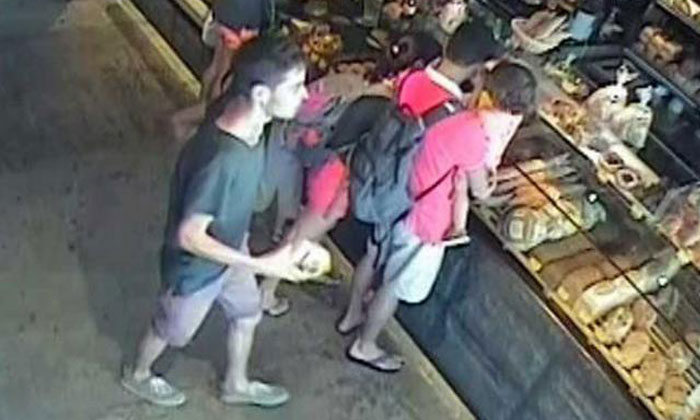 Was the alleged robber behind the Standard Chartered heist last Thursday (July 7) so confident that he found time to pop into an upmarket eatery for a drink and a bite mere minutes after fleeing with his loot of $30,000?

It would seem to be the case, gauging from closed-circuit television (CCTV) footage shown to The New Paper that captured a man who remarkably resembles suspect David James Roach in Baker & Cook, a cafe-bakery in 44, Jalan Merah Saga, in Chip Bee Gardens, about 160m from the bank.

He was in there for about six minutes, during which he spent about four minutes walking around the cafe and ordering a slice of cake and a bottle of water.

He then sat down at a table and finished his snack in just two minutes before hastily leaving the eatery.

Yesterday, the directors of Baker & Cook showed TNP the CCTV footage, which started from 11.25am, based on its timestamp.

This was around the time the police were alerted to the robbery.

Roach, 26, a Canadian, is alleged to have passed a piece of paper to the bank teller during the robbery. The note read: "This is a robbery, I have a weapon, give me money, don't call the police."

The teller handed over $30,000 and then activated the secret alarm to alert the police once everyone's safety was ensured.

Thai police arrested him at a hostel in Bangkok on Sunday.

It was Roach's first visit to Singapore, and he reportedly stayed in a Chinatown hostel for three days before the robbery.

Yesterday, a Baker & Cook director, who declined to be named, told TNP that he reviewed the security footage on Tuesday night after seeing the picture of the suspect released by Thai media earlier that day.

"As our cafe is just nearby, we felt we had a responsibility to check our security footage for this guy in the event we could turn up some evidence," he said.

To his amazement, he saw a man who looked very similar to descriptions matching Roach entering the cafe around the time of the robbery.

"His eyebrows, body shape as well as his T-shirt and even the white earpiece he was wearing looked similar.

"The resemblance was uncanny," he said.

A picture provided by Thai media after Roach's arrest shows him wearing a grey T-shirt and an earpiece.

The robber was described as wearing a hoodie and mustard pants. So if the man in the footage is indeed the robber, he must have dumped them before he entered the cafe.

The cafe director said the man in the video was behaving oddly.

TNP watched the footage last night. It shows the man entering the eatery at 11.25am.

After wandering around a while, he makes his way to the counter, but is told to queue up by the cafe staff.

He walks around looking at the pastries on display before cutting to the front of the queue.

He orders a $5 strawberry lamington - a square spongecake popular in Australia - and a 500ml San Pellegrino bottle of water costing $4.80.

The man, who is carrying a large, bulging, yellow envelope, takes out his wallet and pays in cash. After getting his food, he goes to the front of the cafe, where he sits at a table.

He finishes the bottle of water in two to three gulps and eats the lamington in about two minutes.

Said the cafe director: "That's really strange. Our customers usually take a while to sit down and enjoy their food. But this guy seemed to be in a rush.

"His behaviour seemed to indicate that something was not quite right."

He added that he would be submitting the footage to the police today.

Mr Marvin Zhang, the sales manager of Huntaway Security, which specialises in CCTV security, told TNP that as the timestamp on the CCTV footage is based on the time of the recorder, it is possible that it may not reflect the actual time.

A check against Apple's time server showed that the CCTV's clock was slower by about 30 seconds.

TNP also checked out the route between the Standard Chartered Bank and Baker & Cook.

It took us just under three minutes at a normal walking pace to get from one place to the other using the MRT underpass.

It would have been faster if we had crossed the road.

The cafe director said he decided to come forward in the hope that the evidence would aid the Singapore authorities in their case against Roach.

"We understand every possible lead is important. We have already contacted the police and arranged to hand over the footage. We hope to be doing our part to help," he said.