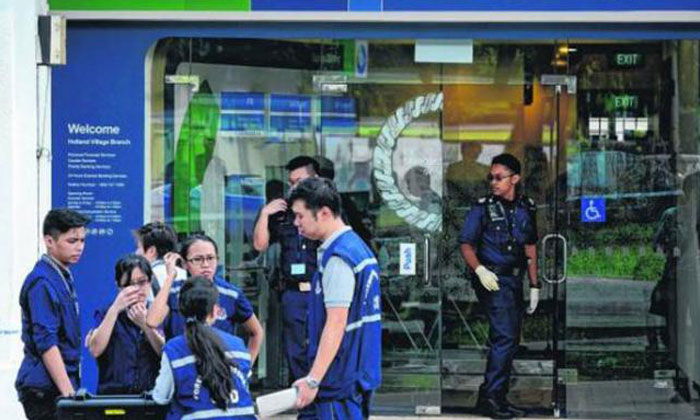 The police are looking for an Australian man who is suspected to have robbed a Standard Chartered Bank branch at Holland Village yesterday.

Stomp broke news of the robbery yesterday after Stompers Edros and Roslan alerted us to the incident via WhatsApp upon seeing police officers on the scene.

According to MyPaper, the daring heist took place at about 11.25am when the suspect got away with $30,000.

The Straits Times understands that the suspect handed the teller a slip of paper with his demands and made off with the cash on foot after she complied.

No weapon was seen during the incident and it is understood that there was no security guard present at the bank.

The robbery put the area round the bank on lockdown, with Standard Chartered closing the branch for the day.

A Standard Chartered Bank spokesman issued a statement that said no bank staff or customers were injured and that the bank had filed a police report and is assisting with investigations.

"We would like to highlight that the safety of our customers and staff are our top priority and our branch staff are all well trained to react to such situations."

The suspect is still on the run.

One resident living in Chip Bee Gardens estate across the street told The Straits Times that the police visited his home with a photo of the suspect.

He was described as a Caucasian Australian man, dressed in a grey hoodie and mustard trousers.

Related Stories
Police on islandwide hunt for suspected robber who made away with $20,000 from Standard Chartered bank at Holland Village
More About:
robbery
robber
police