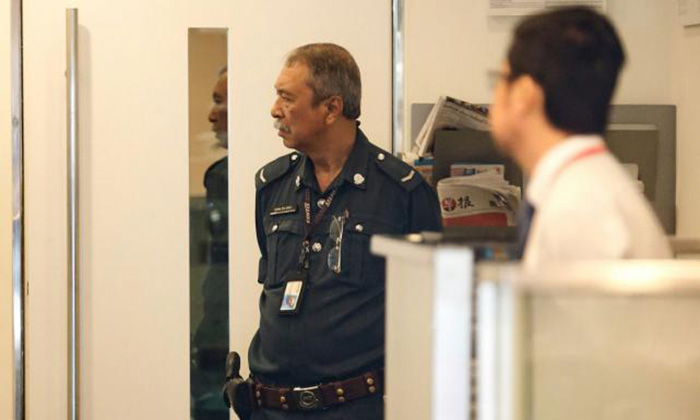 A teller who handed over about $30,000 in cash to a robber at Standard Chartered Bank's Holland Village branch on Thursday did the right thing, according to the bank, which has tightened security there with a security guard.

Yesterday, an islandwide manhunt continued for the Caucasian man who had brazenly walked into the bank around 11.25am, slipped the teller a piece of paper with his demands, then got away with the money on foot.

The branch did not have a security guard then, but a bank spokesman said it had "in-branch security measures" such as closed-circuit TV cameras and staff "are well trained to respond to such situations".

The teller acted in line with the bank's protocols and "in the best interests of our customers and our colleagues", the spokesman added.

"Everyone was safe." She also said the bank has taken immediate action to further enhance security, without giving details, citing ongoing investigations.

Yesterday, a Certis Cisco security guard was present at the Holland Village branch, but this is understood to be a temporary measure.

Banks contacted said it is not mandatory for banks to have security guards, although many do.

The Straits Times observed yesterday that of the six banks - HSBC, StanChart, OCBC Bank, DBS Bank, Citibank and Maybank - in that stretch of Holland Village, the last two were the only ones that appeared not to have a security guard.

Maybank responded to say that it has Certis Cisco armed guards stationed at all its 22 branches islandwide, including the one at Holland Village.

"In addition, we have standard in-branch security measures such as CCTVs. We have also provided training to our staff to handle such situations and our policy is always to prioritise customer and staff safety," said the Maybank spokesman.

An industry source said bank staff are instructed to hand over money peacefully during a robbery so as not to endanger the safety of staff and customers.

"We always tell staff - don't attempt to bring attention to the robbery. You don't want to agitate the robber or antagonise him. What if he pulls out a gun and it turns into a hostage situation? That's even worse," he said.

Most banks that The Straits Times contacted yesterday said the latest incident has not prompted a review of their security measures, since these are regularly updated.

DBS said its branches are "equipped with robust security systems and features".

A spokesman for OCBC said it has measures such as round-the-clock surveillance cameras and Certis Cisco guards.

United Overseas Bank said its branch employees and security personnel have been reminded to be extra vigilant.

It is understood that the police are studying CCTV footage from the vicinity of Holland Village to identify the suspect, who was described as a Caucasian wearing a grey hoodie and mustard trousers.

No weapon was seen during the robbery, which was over in minutes.

Business returned to normal yesterday along the stretch where the StanChart branch is located.

Before the bank opened at 10am, customers were already waiting in line.

Retiree Daniel Liu, who is in his 60s, said he does not think another robbery will happen.

"Singapore is very safe and has a good reputation."

Another retiree in his 60s, Mr Johnny Shing, said: "These things don't usually happen. I think there is no cause for alarm."

More people streamed into the bank during lunchtime, with many seen carrying out transactions at the automated teller machines and making inquiries at the counters.

Outside the branch, a few curious passers-by peered through its glass entrance.

Some customers wondered if the robbery would have happened if a guard had been present.

"I think it would've made a difference," said Mr Willy Lau, 43, who is self-employed.

Robbery 'a serious offence even if no weapons used'

Even if he did not show or use a weapon, the Holland Village bank robber could still face serious charges that attract a severe punishment under the Penal Code, criminal lawyers here say.

They note that a robbery is a serious offence in Singapore, even if no weapons were used.

What remains crucial are the elements of threat and fear, which they say were both present when a man robbed $30,000 from a Standard Chartered Bank branch in Holland Village on Thursday.

The suspect, who is still at large and believed to be a Caucasian man, had passed a slip of paper to the female teller with his demands and she complied.

No weapons were seen during the robbery, which lasted minutes.

"Even if he did not show a gun or knife, it must have been something that he said or wrote on the note that instilled enough fear in the teller for her to hand over the money," said criminal lawyer Shashi Nathan.

"This would be an extortion, even if there was no one hurt," he said, adding that the suspect would face up to 10 years' jail and at least six strokes of the cane if convicted.

Agreeing, criminal lawyer Amolat Singh said: "A person would not ordinarily hand over the money unless there was some reasonable form of fear."

Another criminal lawyer, Mr Sunil Sudheesan, believes that a lesser charge of theft is unlikely, as there was interaction between the teller and the suspect.

If the threat had been made using a deadly weapon, such as a knife or gun, the offender would get at least 12 strokes of the cane for armed robbery, Mr Singh said.

For unlawful possession of firearms or offensive weapons, he may also face possible charges under the Arms Offences Act and Corrosive and Explosive Substances and Offensive Weapons Act.

If found guilty of carrying any offensive weapon in public places, he could be jailed for up to three years and caned.

Mr Singh said using a fake weapon to commit a crime would not be treated lightly under the law.

"The law does not tolerate fake weapons, because the intention is still to instil fear with violence," he said.

A 22-year-old Kazakhstan national was jailed for 15 months in June 2014 for using criminal force to steal from a Japanese woman in Claymore Hill.

Using a toy gun, he threatened to kill her if she did not give him her money.

Unlike a case of snatch theft, robberies are more severe as they involve "more planning and premeditation, with an approach to rob an institution", Mr Nathan said.

In December 2004, a man armed with a fruit knife walked into a POSB branch in West Coast Drive and made off with $37,000.

The suspect remains at large.