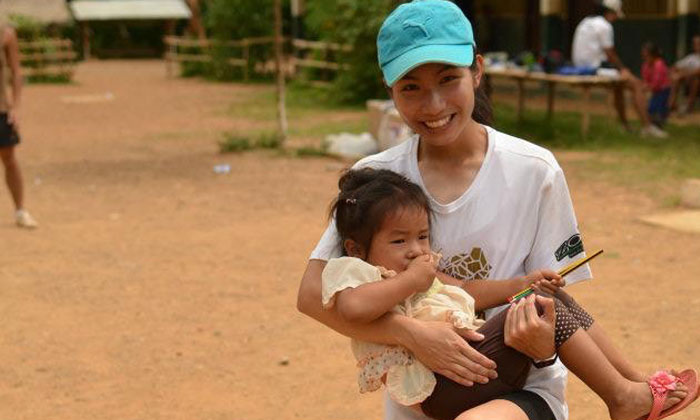 Within months of adding coconut cooking oil to her diet, Joan Poon threw out the box of medicines that she once relied on to keep flu, colds, and her other common illnesses at bay.

Her improved health and wellbeing gave the 24-year-old Singaporean an idea: if coconut oil could boost her immune system and energy levels so powerfully, what could it do for communities where even basic nutrition was a luxury?

"I didn't want to keep my experience to myself," says Joan. "I realised that if we could make coconut cooking oil a staple in less-developed communities, we could transform the lives of millions of people for the better."

The result of that realisation: "Add Oil" (加油), a non-profit crowdfunding initiative to supply coconut cooking oil to communities suffering from widespread malnutrition. Coconut oil is nature’s richest source of Medium Chain Triglycerides (MCTs) – also found in mothers’ milk – which dramatically reverse malabsorption of nutrients and cause rapid, well-documented improvements in overall health as a result.

Add Oil's first three targets, selected in close consultation with chief beneficiary World Vision, include:
⁃ Moises Padilla, Philippines, where 1 in 10 children aged six and under don't have enough to eat;
⁃ Thusalushaka, South Africa, where only 15% of families get proper basic nutrition; and
⁃ Lesotho, where malnutrition and diseases contribute to around 1 in 10 children dying before their fifth birthday.

Joan hopes to raise enough funds to produce 30,000L of coconut cooking oil - a year's supply for the three communities. World Vision will work with Joan and the Add Oil team to distribute the cooking oil to communities with the greatest need.

"Malnutrition stunts livelihoods and compromises people's basic health throughout South-East Asia and all over the world," Joan says. "A simple dietary shift like switching to coconut cooking oil could give these people a hope and a future: being strong enough to attend school, hold down a job, and not fall prey to constant illness."

"Unlike other coconut products, coconut cooking oil is a staple that all communities can find a use for," Joan explains. "In fact, cooking oil already makes up a major part of most global food aid initiatives - so why not deliver an oil that improves those people's health as they use it?"

This is not Joan's first involvement in aid work: the PR executive has been previously involved in food aid initiatives in Laos and Indonesia.

"I've always been inspired to help the hungry, in all senses of the word," Joan says. "Just $3 - the cost of lunch at a local food court - can give a family a litre of coconut cooking oil, enough to last them a month.

"I've learnt that if you have something good, the best thing you can do is share it. Even the smallest contribution to Add Oil can go a long way to giving those less fortunate a brighter, fuller future."

To donate or find out more about Add Oil, visit bit.ly/addoilsg or head to Facebook (https://facebook.com/addoilsg) for the latest updates.