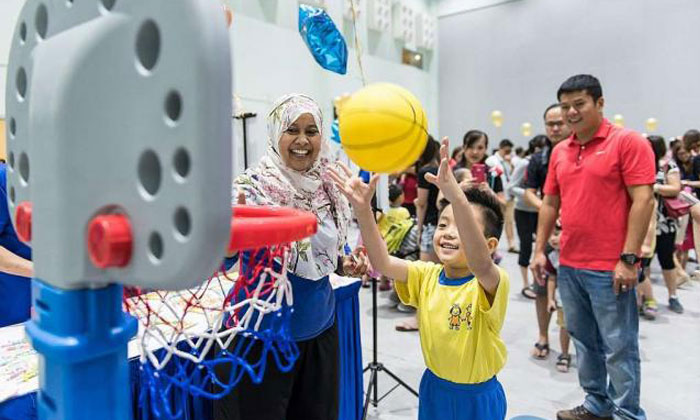 They are aged just two to six years old, but they raised thousands of dollars for less fortunate students.

Some 2,000 children at 27 Star Learners' childcare centres did handicraft and came up with games for a fun fair on July 30 where over 4,000 people showed up.

The fund gives pocket money to students whose families earn not more than $625 in per capita gross monthly household income.

Each month, primary school pupils receive $60, secondary school students get $95 and those in junior colleges, polytechnics and the Institute of Technical Education get $120.

Star Learners' chief executive Tan Meng Wei said the children were creative, with kids at one childcare centre even running a cafe during the fair.

"They decided on the menu, prepared the food, served and took payments. They were told about SPMF and worked with dedication to raise the money."

Pre-schools have also joined in the fund-raising.

Instead of buying gifts for Teachers' Day, students at Ngee Ann Secondary School put up $10 to name a teacher he or she would like to honour.

Some of them got their parents and teachers to commit to buy cookies and crafts.

In total, schools, from pre-school level upwards, contributed $41,000 to SPMF this year.

Ms Tan Bee Heong, SPMF general manager, said: "It is heartening to note that the young are stepping forward to raise funds, and to help their schoolmates and other students who need financial support."

The fund has received $5.5 million from corporates and individuals so far, and is on track to raise $6 million this year.

In October, SPMF started a partnership with the Education Ministry so that needy students can apply to be SPMF beneficiaries through 300 schools.

Previously, students could apply only through 68 disbursing agencies.

The eligibility criterion for the fund was also raised from a per capita gross monthly household income of $560 to $625.

Since October, SPMF has received 5,700 applications through schools.

Ms Tan said she expects to see more students applying for help next year as the process becomes more accessible and convenient.

"We will have to increase our disbursements to support these students and we hope the public will donate generously to support our cause," she said.