Pre-schoolers raise more than $150,000 to give back to society 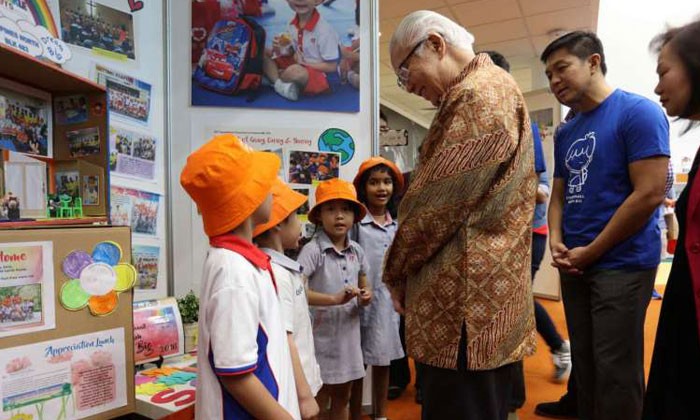 Some 20,000 children from over 300 pre-schools have contributed over 500,000 hours in community projects and raised more than $150,000 for charity in the past six months, as part of a government initiative.

The time spent was a five-fold increase from the inaugural run of the Early Childhood Development Agency's Start Small Dream Big initiative last year, when more than 8,000 children took part.

The amount raised was also higher than the $100,000 raised last year. This went to beneficiaries of the President's Challenge and other community groups, including the Community Chest, St John's Home for Elderly Persons, Malay Youth Literary Association (4PM), Singapore Association of the Visually Handicapped, and Children's Cancer Foundation.

The Start Small Dream Big initiative aims to encourage young children to give back to society, and in doing so, instil the spirit of giving and positive values such as kindness and compassion.

The pre-school children's community projects ranged from raising funds for charity and serving the less fortunate, to interacting with the elderly and caring for the environment. They were planned and implemented by the children, with the support of their teachers and families.

Said Dr Tan: "I am delighted to see a new generation of young and compassionate Singaporeans participating in the President's Challenge Start Small Dream Big project. The project has given our children small but invaluable opportunities to make positive changes to the world around them, and taught them to dream big."

Mr Tan added: "I am extremely heartened to see many parents, pre-schools and the community working together to inculcate positive values in our little ones through Start Small Dream Big, so that they can all grow up to be kind, helpful and responsible citizens. By showing care and concern for the less fortunate around us, we can make Singapore a better home."

The finale event included a carnival to raise funds for the President's Challenge. Over 10,000 people attended the event.