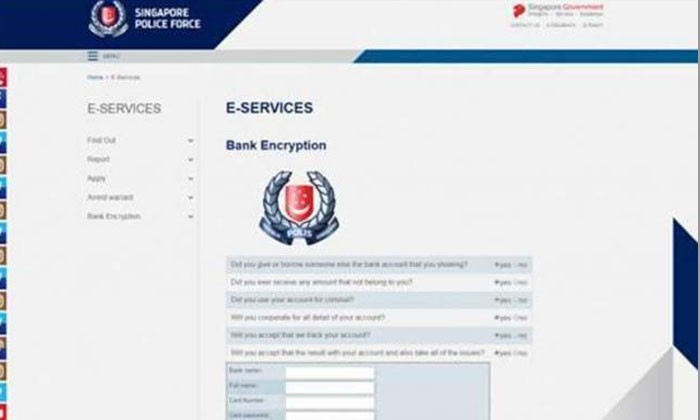 Yet another type of scam has surfaced in Singapore, after a woman lost $80,000 to scammers pretending to be police officers.

The 41-year-old victim received a call from a stranger claiming to be a police officer, who then accused her of being involved in money laundering.

She was then asked to key in her personal and internet banking details on a website that looked similar to the Singapore Police Force (SPF) website, in particular the "E-Services" page. She was told that the details were needed for investigations.

The victim only discovered later that her internet banking account was accessed illegally and multiple unauthorised transactions were made, resulting in a loss of over $80,000, the police revealed in a statement on Wednesday (Sept 21).

The police clarified that their official website is www.police.gov.sg.

The latest case represents a new variation of scams where the perpetrators impersonate the authorities. Previously, some people had reported receiving missed calls starting with the numbers '999' on their mobile phones. When they returned the calls, they would be connected to the police emergency hotline instead. Another variation involves victims receiving calls from scammers claiming to be authorities from China, who demand that they make a payment through remittance of money. The authorities urged Singaporeans to take precautions when receiving unsolicited calls, especially from unknown parties. Members of the public are advised to ignore such calls, ignore any instructions to remit or transfer money, and refrain from divulging personal information and bank details online or over the phone. Anyone with information can all the police hotline at 1800-225-000 or submit it online at www.police.gov.sg/iwitness.

Related Stories
Scam tactics getting more 'real' as woman receives call from '999'
Police phone scam: Stomper shares how the call sounds like
'Sofa insurance', SCDF and 9 other scams that are happening in Singapore right now
More About:
scam
police
money