Motorcyclist dies after getting pinned under lorry in Tuas: Fourth fatal crash this week 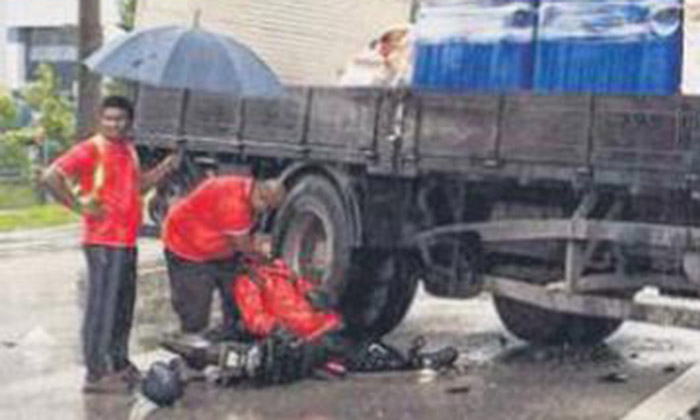 The first thought that crossed his mind when he heard a loud crash outside his workplace was: "Not again."

His worst fears were confirmed when he went out to check and saw the gory scene of yet another accident on Wednesday morning.

A lorry had stopped in an awkward position and a man was pinned under one of its rear wheels, his damaged motorcycle beneath him.

The technician, who wanted to be known only as Mr Aaron, told The New Paper: "We were eating breakfast in an air-con room, its doors and windows shut tight. Yet we could hear the crash loud and clear.

"There was an accident at the same spot just two months ago," added Mr Aaron, who is in his 30s.

He said he has seen about 10 accidents involving heavy vehicles in the industrial estate in Tuas in the last eight years.

The peak-hour traffic, usually packed with heavy vehicles and motorcycles going to and leaving the factories in the area, makes the roads especially dangerous, he added.

Wednesday's accident happened at about 7.40am at Tuas West Road towards Tuas South Avenue 2.

"From the way the lorry had stopped, it looked like it was trying to make a right turn after leaving a factory when it collided with the motorcycle," said Mr Aaron.

"The motorcyclist was in bad shape. His whole face was bloody from a head injury and his legs looked deformed. I don't think he was moving much any more."

He added that it was raining at the time of the accident.

"We didn't get too near to the scene because we couldn't do anything to help. My colleague just left his umbrella over the victim to shield him," said Mr Aaron.

A Singapore Civil Defence Force spokesman said the 27-year-old motorcyclist, who was pinned under the lorry, had to be extricated by officers using rescue tools.

The victim, believed to be a Malaysian, was pronounced dead by paramedics at the scene.

A 33-year-old driver was arrested for causing death by a negligent act and investigations are ongoing, said the police.

The accident on Wednesday was one of four fatal accidents, three of which involved heavy vehicles, in three days this week.

When TNP checked out the area at peak hour yesterday morning, Tuas West Road was packed with heavy vehicles and motorcycles.

Road safety experts told TNP that blind spots on heavy vehicles are just one of the factors contributing to accidents.

Mr Aaron, a Malaysian who drives to work from Johor Baru every morning, believes more traffic lights with more right-turn arrow signals would be helpful for motorists in the area.

"Sometimes, it's confusing even for someone who has been driving here for eight years," he said, adding that the accidents he has seen are a stark reminder of the importance of driving safely.

"Each time I see an accident, I am both sad and scared (about driving). But I have no choice. I live in Malaysia but work here. So I just tell myself to be more careful when I drive."

Blind spots a worry for drivers
Trailer driver Jasman Jili tries his best to drive safely, but his vehicle's blind spot is a perpetual worry.

For instance, if a car is right beside his trailer truck, the 43-year-old would not be able to see it because of the wide blind spot.

"We can't do anything about the blind spot, but motorists don't understand that. Nowadays, there are also people on e-scooters, making things a lot trickier," he said.

He said: "It is riskiest when making a turn. I can't just check once - I have to check twice, even thrice, to make sure the coast is clear."

Mr Ng, who has been driving for more than 30 years, said he had seen his fair share of careless drivers.

"As our vehicles are higher, we can see other drivers very clearly. I've seen lorry drivers filling out forms while driving and many motorists using their phones on the roads."

He said: "These drivers are paid per trip and encouraged to make as many trips as possible. Many of them suffer from fatigue and may not be alert on the roads."

Mr Tay believes employers can play a role in ensuring that their drivers are well-trained. He noted that lorry drivers in Europe have to go through refresher courses every five years.

"For employers here, training would mean extra costs and they would be short of manpower during the course period," said Mr Tay.

"But if they think about the long-term benefits, proper training for drivers would mean protecting the company's image and the lives of employees and other road users."

This year, the Automobile Association of Singapore (AAS) launched a prevention course aimed at commercial drivers, including heavy vehicle drivers.

AAS chief executive Lee Wai Mun said that more than 100 drivers have been trained over the past few months.

"Advancements in technology, such as proximity sensors, can address the issue of blind spots, but the issue is still about safety and sharing the roads," he said.

"Pedestrians must also realise that just because they can see the vehicle, it doesn't mean the driver in the vehicle can see them."

- A 71-year-old pedestrian was killed after she was hit by a lorry at the junction of Choa Chu Kang North 5 and Choa Chua Kang Street 51.

Unaware that he had hit someone, the driver continued driving with the victim trapped under the lorry until a passer-by shouted for him to stop, a witness told Chinese evening daily Shin Min Daily News.

The woman was pronounced dead by paramedics at the scene. A 30-year-old male driver was arrested for a rash act causing death.

- On the same day, a 74-year-old man was hit by a taxi at the junction of Chin Swee Road and Havelock Road.

A witness told Shin Min that the victim's nose was bleeding non-stop and his injuries looked serious. He was taken unconscious to Singapore General Hospital, where he later died.

- On Monday, netizen Syafiq Syahmi posted a heart-rending account of his attempt to save a cyclist who had been hit by a prime mover in Punggol at about 7am.

Mr Syafiq wrote on Facebook that the cyclist had been going against the flow of traffic and was "taking chances" when he was run over by the heavy vehicle at a pedestrian crossing.

He added that the cyclist had suddenly appeared at the prime mover's blind spot.

"I tried my very best in giving CPR (cardiopulmonary resuscitation) on the victim while waiting for the ambulance to arrive but it was too late," he wrote.

A police spokesman said the 27-year-old male cyclist was taken unconscious to Khoo Teck Puat Hospital, where he died.

The 61-year-old male driver was arrested for a rash act causing death.

The police are investigating all the cases.