S'porean biker who died after hitting tyre on Malaysian road: He was a responsible motorcyclist, say friends 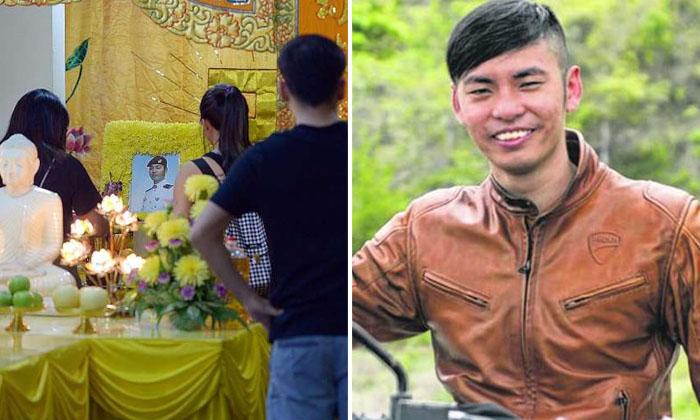 He had turned his head to check his blind spot after overtaking a bus.

But by the time Mr Leonard Wong turned his head back and spotted the van tyre in front of him in the middle of the road, there was nothing he could do.

Mr Wong's Ducati motorcycle hit the tyre and he was flung off the bike. He died on the road shortly after.

The information technology engineer, who would be 26 today, was travelling in a convoy with five other riders to Fraser's Hill, about 105km north of Kuala Lumpur in Malaysia, when the accident happened on Saturday morning near Seremban on the North-South Expressway.

At his wake in Jurong East Street 21 last night, his friends in the convoy recounted the incident.

Mr Wong was the last rider in the convoy, they said.

"I was in front so I raised my hand to alert them that there was debris on the road," said Mr Tan Teck Kian, 23, who works in the pharmaceutical industry.

The signal was passed down to the other riders, but Mr Wong might not have seen it because he had been checking his blind spot, said Mr Lin You Zhai, 26, the fourth rider in the convoy.

"He was checking his blind spot before changing lanes, and when he looked forward, he hit the tyre," said Mr Lin, an undergraduate. "No one expected a tyre on the road."

The group had pieced together what happened through footage recorded with the GoPro cameras they had with them.

Mr Lin said it took 30 minutes for the first ambulance to arrive. "If they had come earlier... (Mr Wong) might have had a chance to survive," he said.

The Straits Times was at his wake yesterday for about two hours and observed over 150 friends and family members paying their respects.

Friends said Mr Wong was a responsible and experienced biker who would not scrimp on safety gear. He was also open with sharing tips on safe riding.

Accounts manager Andrew Luo, 58, said: "He was careful and cautious. He was the kind of person who would look after the group of riders when they go (to Malaysia)."

Other friends also remember Mr Wong as the "funny person" in the group. "He always knew how to make people laugh," said insurance agent Christine Boo, 26.

Ms Jasmine Lim, 29, a cousin of Mr Wong's who had been living with him since they were teenagers, said he was "very resourceful and handy". She said: "Any time something was broken in the house, he would repair it."

Mr Wong was an only child and his parents are divorced. He lived with his mother and relatives.

"His mum was worried about him (biking), but he would always try to reassure her," said Ms Lim.