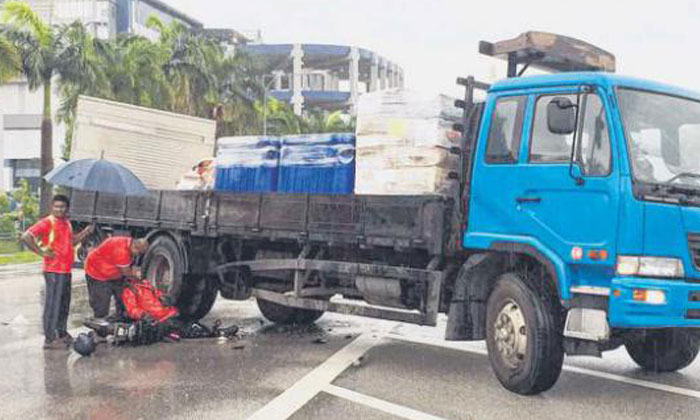 A 27-year-old motorcyclist died after an accident involving a motorcycle and a lorry along Tuas West Road, towards Tuas South Avenue 2, on Wednesday morning (Oct 19), reported The Straits Times.

The police were alerted to the scene at 7.42am. Pinned under the lorry, the male motorist was pronounced dead by the paramedics, after he was extricated by the Singapore Civil Defence Force (SCDF) using rescue tools.

According to Shin Min Daily News, the victim was a Malaysian.

A technician who wants to be identified by the name Mr Wu, told Shin Min he heard a loud bang when the accident took place.

"The motorcyclist was trapped under the lorry together with his vehicle. He lay in a pool of blood and both his legs were deformed from the impact of the collision. It was a very terrible sight," said the 32-year-old.

Mr Wu also said the lorry driver got out of his vehicle to check on the situation and help the motorist, but was unsuccessful.

The lorry had collided with the oncoming motorcycle after making a right turn from a factory he had just left, reported Shin Min.

The 33-year-old lorry driver was arrested for causing death by an act of negligence.

The SCDF sent an ambulance, a fire engine, a Red Rhino and two supporting vehicles to the scene. And police investigations are ongoing.