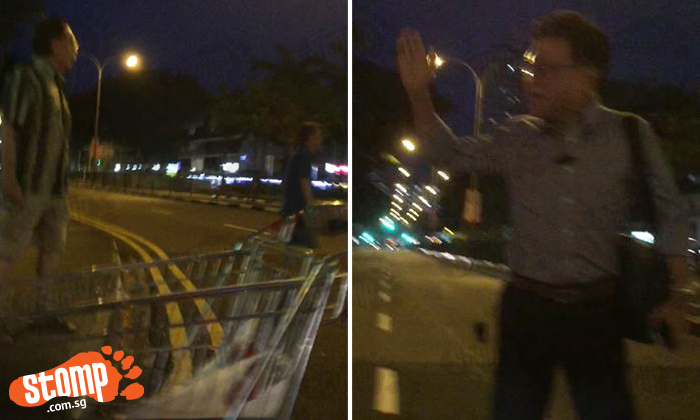 Two men were seen in a heated argument in Toa Payoh yesterday evening (Oct 13) at around 7.20pm -- over a supermarket trolley.

Stomper Amanda witnessed the incident and contributed a video showing the two guys raising their voices at each other.

The dispute apparently started because the older man, who was wearing a green striped shirt, had been pushing a NTUC trolley home -- which the other party did not thought was right.

"I was crossing the road from Toa Payoh Block 79A to Toa Payoh Central and two men (uncle and old man) drew my attention when they were arguing over a NTUC trolley issue.

"The uncle (in a blue long-sleeved shirt) in his 50s was explaining to the old man about why he should not push the NTUC trolley back home because it belonged to the supermarket.

"However, it did not turn out the way the uncle thought it would. Instead, the old man shouted and hurled hurtful words to the uncle.

"Still, the uncle remained very patient in explaining that a trolley should not be pushed back home (there was one NTUC bag in the trolley so that may be the reason why the uncle approached the old man).

"But the old man continued to hurl insults ("This has got nothing to do with you, are you NTUC? You are an idiot!") at the uncle and decided to push the trolley back to his home.

"Thumbs up to the uncle who took the initiative to approach this old man!"

Related Stories
Driver parks car at double yellow line area and gets into heated dispute with man who tries to snap a photo of his vehicle
Female Mercedes driver allegedly knocks down biker -- then argues with passers-by and splashes water on guy
'Stupid Singaporean!' Man and woman get into heated argument on bus
Woman throws drink on diner, then kicks her and grabs chair at Smith Rd coffeeshop
More About:
fight
dispute
argument
uncle fighting over trolley