'Stupid Singaporean!' Man and woman get into heated argument on bus 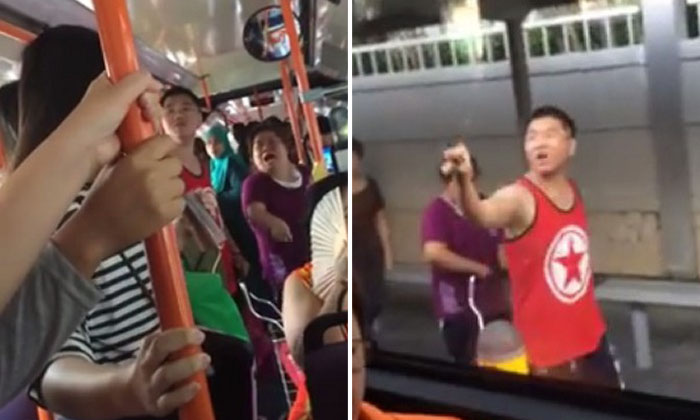 A man and woman was filmed engaging in a heated dispute on a bus in Singapore, in which the man called her a 'stupid Singaporean'.

A clip showing the argument was uploaded by Video news on Sep 13.

In the video, the man and woman can be seen yelling while other commuters looked on. It is not known how it escalated.

The clip starts off with them arguing about Singapore and Singaporeans, and the woman telling him to 'get out'.

The man replies, "Who are you to me? Are you the bus captain?"

"I got pay money okay!

"You think you president ah!"

It is unclear when and where exactly this happened.

The dispute escalates when the man starts hurling vulgarities. The duo start conversing in Mandarin.

The man yells at her, "Are you Singaporean or not? You know the law or not?"

"Then do you know the law? You are in Singapore and yet you scold Singaporeans," the woman replies.

A middle-aged woman, who seems to be the man's companion, then decides to chime in by shouting,

"Keep quiet, keep quiet la! Don't provoke him he is sick one!"

This prompted netizens to discuss if we should be more considerate if he really was sick. Others debated if the auntie should have stepped in earlier if she knew, to stop the argument from going further.

Related Stories
'Ridiculous' man asks for 'proof' when pregnant woman wanted to sit down on empty reserved seat on MRT
Uber driver jailed after brawl with traffic warden and using abusive words on him
Loud quarrel in the middle of the night keeps residents up Jalan Bukit Merah
More About:
argument
argue
dispute
Bus