Married for 54 years, but forced to stay apart due to lack of beds at nursing home 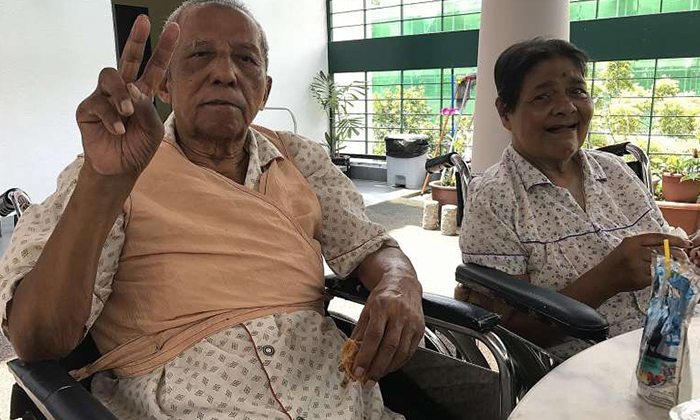 They have been married for 54 years but were forced to live apart for one and a half years in different nursing homes due to a lack of beds.

When the once inseparable couple was finally reunited under one roof late last year, the wife's dementia condition had deteriorated to such an extent that she could not recognise her own husband.

"She told him: 'This is not my husband' and rejected him," said their daughter, Madam Zaleha Abu, 45. "My dad, who was initially very excited to finally meet her, became quiet. It was heartbreaking and my father wept frequently after that," she added.

Cases such as this raise the issue of whether the shortage of nursing home beds here means that elderly couples who need such services have to spend their golden years apart. In some cases, the separation may be even more acutely felt if one of them has dementia.

The authorities said no priority is given to a person who wishes to enter the same nursing home that the spouse is in, unless the senior citizen's physical or mental well-being is dependent on both of them being under one roof.

Applications for a bed are processed on a first-come-first-served basis and only those with urgent care needs may get to jump the queue.

A similar story that caught global attention unfolded in Canada in August this year. An elderly man and woman, who have been married for 62 years, were placed in separate nursing homes for the better part of a year due to a backlog in the healthcare system.

Every other day, a family member would drive for 40 minutes to bring one of them to the other so they could spend time together. Every time the husband and wife said goodbye, there were tears.

Their granddaughter pleaded with the community to help speed up the move as her grandfather had dementia. The family feared his memory of his wife would fade faster the longer they were apart. The couple were reunited in September.

Madam Zaleha's mother, Madam Nashua Adam, 74, was first placed in an Orange Valley nursing home in Marsiling in late 2013 when her dementia worsened.

The family had initially wanted to put her in a cheaper, charity-run nursing home with dementia care services in the north that provided halal food. There were no vacancies and she was placed on an interim scheme at Orange Valley, a private nursing home, until there was a bed elsewhere that would better meet her needs.

Visiting her mother and caring for her father at home took a toll on Madam Zaleha's health and she developed depression, she said.

So, she applied for a nursing home place for her father and the Agency for Integrated Care (AIC), which oversees nursing home placements, expedited the case because she also had an eye condition that required an operation.

Mr Abu got a place at Swami nursing home in mid-2014. Madam Zaleha then requested for her mother to be transferred to Swami.

The elderly couple always preferred to do things together, so Madam Zaleha thought it would do them good to live together at Swami. But there was no vacancy for female residents at Swami and she said she was told that the expected waiting time was three months to a year.

When one year was up, Madam Zaleha contacted Swami and AIC regarding the move, but she was informed that there was still no vacancy.

In the meantime, she shuttled to and fro between both nursing homes and brought her mother to visit her father once a month. But as time passed, Madam Zaleha grew increasingly anxious.

In August last year, she went to a Meet-the-People session and approached Nee Soon grassroots leaders for help. Her mother managed to get into Swami a few months later in November that year when a bed became available.

Nurses in Swami make it a point to arrange for the married couple to be together every lunch and tea time, as well as during certain exercise sessions or activities.

But after the elderly couple were reunited in Swami, the nurses do not refer to Mr Abu as Madam Nashua's husband. This is because she now recognises him only as a good friend and gets agitated whenever he touches her, for instance.

The husband and wife also live in separate rooms as nursing home policy in Singapore stipulates separate accommodation for residents of different gender.

The wife sleeps in a 15-bedded room while the husband is in a double-bedded room down the corridor.

Said Madam Zaleha of her parents' case: "I understand that their dementia condition may have deteriorated similarly even if they were not separated. But if the application for a spouse to join another in the same nursing home were given priority, and if the waiting list had not been so long, perhaps my parents could have spent more lucid moments together."

She added that while the authorities do face constraints, "they need to bend the rules on a case- by-case basis, even if they can't break all rules".

For now, Mr Abu is content with just keeping his wife within sight.

"I prefer to have her in the same room so that if anything happens to me, she will know," he said. However, he added: "But as long as I can see my wife, it is all right."