Confessions of S'pore nurse: 'Patients spit at and molest staff, play with faeces' 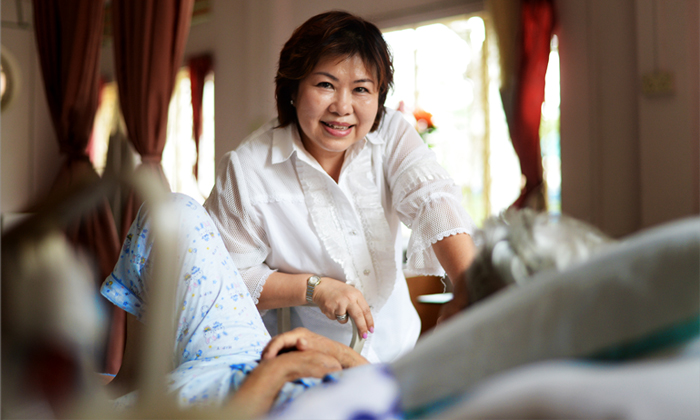 It is bad business to criticise your own product.

"I always tell people they should find a way to look after their parents instead of leaving them in my nursing home. I'm a nurse first and a business owner second," says Madam Ong, 59, who started the first home in 1984.

Not that she could accept new customers if she wanted to, since the 216 beds in both nursing homes are completely filled up. There are around 12,000 beds across Singapore's nursing homes today.

Madam Ong says: "The waiting list is very long, so long that I don't even allow new people on it.

"There are just no more spots left. These days, putting one's parents in nursing homes is no longer a taboo."

The rising demand for her services is not matched by supply of prospective employees - few Singaporeans are willing to work as nurses in long-term care.

All 64 of her care workers at the nursing homes are foreigners.

She says: "In the past, I have tried advertising many times for people to join us, but the response has always been bad.

"The few who do get hired end up leaving after a few months."

Even her own daughter - now studying for a master's degree in nursing in the US - is not keen to join.

Madam Ong says: "My daughter tells me that Singaporean nurses do not want to work in a nursing home because there is little to no career advancement. There would be more opportunities for them if they work in a hospital."

She is at work before 6am daily,. That's when residents at the home are up for a shower.

So shorthanded are they that Madam Ong chips in by preparing the residents' medicine and doing rounds with her staff, shuttling between the two homes.

Madam Ong does so without complaints, but admits that it can be exhausting.

She has no plans to open another home as she does not believe she has the energy to manage another place.

Life as a caregiver is tough and the care workers - she calls them her "girls" - have to put up with a lot, she says wistfully.

A recent study commissioned by the Lien Foundation and Khoo Chwee Neo Foundation found that in some homes, a single care worker can end up looking after 20 to 30 residents at night.

"Tensions do get high. Some of my girls get spat at by residents. Those with dementia also make a mess by playing with faeces, and one resident even molested one of my girls while she was bathing him," she says.

To help manage these situations and stop her staff from venting their frustrations on the residents, Madam Ong keeps a close eye on the operations through a network of closed circuit television cameras.

That would still not stop the occasional emergency. Two mentally handicapped residents somehow managed to go out on their own, and Madam Ong had to pound the streets to track them down.

Despite the difficulties, Madam Ong loves the job because of her residents.

She recalls an elderly man who lived in the home for 14 years. He would help out by watering the plants and was always ready to dole out life lessons to her, and his death two years ago deeply affected her.

Madam Ong says: "Like what I always tell my girls, we must always aim to make their last days a happy affair. That is the ultimate reward for us in this job."

SECRETS OF THE TRADE