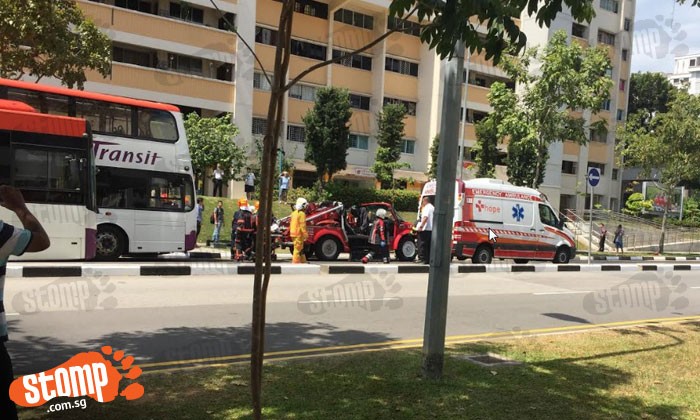 Stomper Nrick was walking along Hougang Avenue 9 (opposite Ci Yuan Community Club) at around 11am today when he saw an accident involving an SBS bus and a pedestrian.

“I heard the pedestrian was hit by the bus and stuck underneath. I hope the injured pedestrian is okay.”

“SCDF was alerted to the accident along Hougang Avenue 9 at about 10.35am.

“A man’s right leg was trapped under the bus and was manually freed by SCDF.

“The hospital was alerted to be on standby and received him.

“The accident involving a bus and a male pedestrian took place at 10.32am, along Hougang Avenue 9.

“The male pedestrian was conveyed to Tan Tock Seng Hospital.”

According to the SCDF, the injured pedestrian was a Chinese male in his 50s.