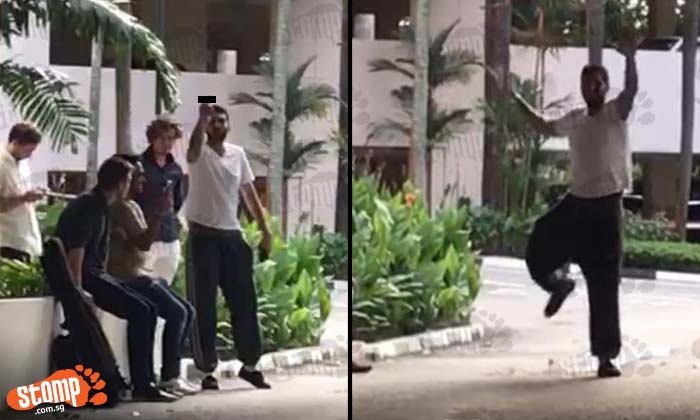 Stomper Wong alerted Stomp to a  video that he posted on Facebook showing a man hurling vulgarities at and mocking a taxi driver by pointing his middle finger at him and dancing like a clown, after allegedly refusing to pay the fare.

"The taxi driver is my friend who works very hard for a living," shared Wong.

In the video taken by Wong's friend, the man in a white shirt is seen with a group of friends, under a sheltered driveway near 1 Rosewood Drive.

The man told the driver, "Why the f*** is he taking a video for? Yeah, keep video-making, f***ing waste your battery."

A huge black van then pulled up at the driveway, and the group subsequently left.

Before leaving, the man can be heard telling the driver, "Be right back, yeah? You stay there, keep taking the video, yeah."

According to the Stomper, the incident happened on Jan 1, and the driver has since made a police report.

In the police report, the taxi driver stated how he first received a booking from ComfortDelgro, and went to pick up the man and one of his friends.

However, when the driver asked the man for their destination, both the man and his friend gave two different locations. The driver was puzzled but continued to drive.

As the driver drove past a guardhouse, the man in the white shirt suddenly told the cabby to stop, and alighted with his friend.

The cabby then decided to make a turn back to the pickup location to see what the man was up to.

When the driver arrived, the man and his friends started to mock the driver.

The man then challenged the driver to call the police, which the driver did.

"When my friend shared with me about this, I felt really sad for him.

"I hope to share this and let Singaporeans know about this incident."