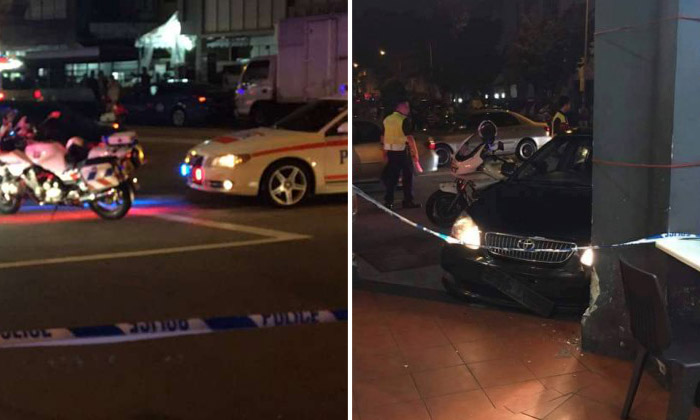 Two people were sent to hospital and four vehicles smashed up in a 13km police car chase from a roadblock along Henderson Road to Geylang yesterday (Sep 11).

In response to media queries, the police confirmed that a roadblock was conducted along Hendersen Road on 11 September 2016.

A 22-year-old male driver refused to comply with the officers' instructions at the roadblock and sped off.

Photos on Twitter and Beh Chia Lor show the aftermath, and a Lianhe Wanbao video shows the dramatic scene.

The male car driver and the passenger of the van were injured and conveyed conscious to Tan Tock Seng Hospital.

The male driver was subsequently arrested for evasion of roadblock and other traffic and drug related offences.

"The police would like to advise members of the public to cooperate with us when approached by officers.

"Evasion of a roadblock can cause potentially serious harm to other road users and also to our police officers."