Man loses wife 9 years after donating his kidney to her: 'Her last words to me were...' 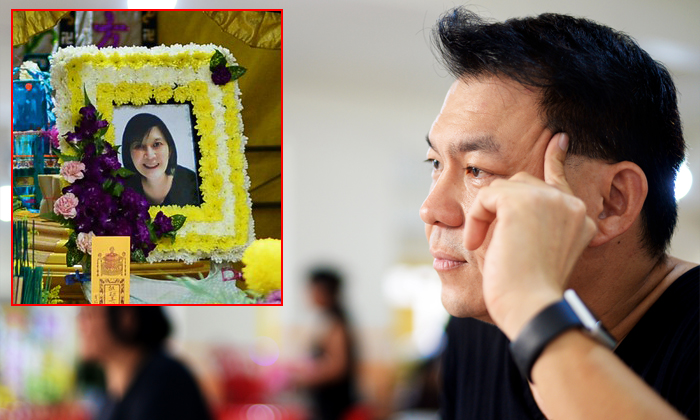 They knew she was living on borrowed time and thus wanted to live life to the fullest.

When Madam Christine Chia had kidney failure in 2007, her husband, Mr Simon Ong, donated one of his kidneys to her.

They then spent nine years preparing for the possibility of her death, knowing that transplanted kidneys come with an expiry date.

Madam Chia, 43, died at the Singapore General Hospital on Tuesday from heart failure, which had also led to complications with her donated kidney.

Mr Ong, 44, says: "At her deathbed, I told her that I was very thankful that I had her, and that she made me feel fortunate.

"But I also said that I was still not ready. I still needed more time with her. I thought I was prepared for it, but I found it difficult to come to terms with her death."

The New Paper on Sunday spoke to Mr Ong, a horticulturalist and landscaper, at Madam Chia's wake.

She was cremated yesterday at Mandai Crematorium.

He tells TNPS with a smile: "We met at a chalet... These were old-school days when people were still going out like that."

He said they led simple and happy lives until the news of her kidney failure hit.

When the doctors found that Madam Chia did not respond well to dialysis, Mr Ong immediately offered his own kidney.

Their blood types, both O, were a match.

Mr Ong says: "She had a close brush with death. It could have ended then but thankfully it did not.

"But I knew from reading online articles that transplanted kidneys would eventually fail again. The doctor did not say how long she had, but I was expecting around 12 years."

Madam Chia left her job shortly after her diagnosis.

In the nine years after the kidney transplant, Madam Chia and Mr Ong strived to maximise her time left by touring the world.

"We wanted to live life to the fullest, since you can never tell when things will go wrong," Mr Ong says.

"Every day was a bonus."

They travelled to places such as Japan, Taiwan and Italy - sometimes with other family members - to experience other cultures and take in new sights before it was too late.

Mr Ong says: "Of course, she would tell me secretly that she preferred the trips that were just the two of us.

"Her favourite place was Venice, which we visited several years ago. She loved it."

They kept a dog, a Yorkshire terrier named Candy, to keep Madam Chia company at home.

The couple had bought a new condo unit together in 2013 and received the keys a few months ago.

But she had a premonition that she might not be able to make it. Madam Chia had been feeling ill since the start of the year.

He recalls: "She was very upset and told me she might not be able to move into the new place with me.

"Her last words to me were to thank me for giving her everything, and that she had lived a blessed life."

Related Stories
S'pore man proposes to GF -- by offering her his kidney: 'I thought he was joking'
S'pore couple hold wedding shoot at blood donation centre -- where they had their first date
Woman finds ex-BF's 90 touching love letters only after breaking up -- but it's too late
Japanese businessman reunites with Singapore girl whom he had a 40-year crush on
heartbreaking
death
love
couple
illness
husband donates kidney to wife
love with an expiry date