S'pore man proposes to GF -- by offering her his kidney: 'I thought he was joking' 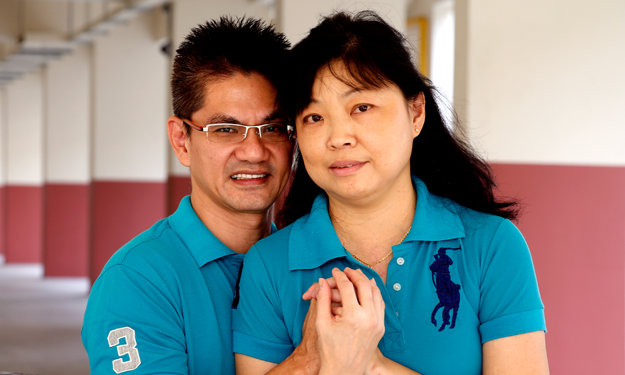 Mr Ng Chai Lai dated his girlfriend for six years before popping the question in 2013. But instead of a marriage proposal, he offered her the gift of life - one of his kidneys.

Back then, Ms Chua Bee Leng had been on the waiting list for a kidney transplant for 10 years after an autoimmune disease caused her kidneys to fail in 2004.

"I thought he was joking. I had already given up hope of receiving a kidney as my family members were unsuitable. Who would have thought a boyfriend would do that?" said Ms Chua, 47.

The transplant was done in December 2013. Such transplants, between people who are not family members, are few and far between.

The transplant was nothing less than a miracle due to three factors, said Mr Ng, 47, a taxi driver.

First, the doctor told them that should they have wanted a transplant a few years earlier, it would not have been possible. Both had different blood types and it was only recent medical advancements that enabled the transplant to proceed.

Second, Mr Ng was a former drug abuser who had been behind bars for close to 20 years. He first met Ms Chua while undergoing rehabilitation at a halfway house, as she was visiting her brother, who was then also a drug addict.

Due to Mr Ng's history of drug abuse, he had to get the nod from the authorities and a transplant ethics committee, as well as go through a battery of tests, before the transplant was approved.

Third, doctors found that one of Ms Chua's coronary arteries was blocked and she needed heart bypass surgery before the transplant.

But the couple were willing to go through the obstacles as Ms Chua had been in great pain while on dialysis. Several operations had to be done to create a fistula in her arms, legs, neck and thigh for blood to enter and leave her body during dialysis.

Serious infections kept setting in and she had to be hospitalised almost weekly. Mr Ng recalled that her screams of pain were so loud that everyone in the ward could hear them. After her thrice-weekly dialysis sessions, she would be so weak that she could not walk home.

"The doctor said she did not have much time left and I made up my mind to give my kidney to her.

"I figured that even if my health fails after that, better to have two of us around for that short span of time than me having two kidneys yet end up losing her," said Mr Ng.

Ms Chua's quality of life improved greatly after the transplant.

She is now able to work as a part-time cashier. In her downtime, she jogs slowly or does brisk walking. Mr Ng also recovered quickly. He said being a donor has not affected his health at all.

Both of them have since applied for a flat in Bukit Batok and intend to marry in the next two years.

Said Ms Chua: "He made a noble sacrifice and I am forever indebted and grateful. Life is no longer the same now."