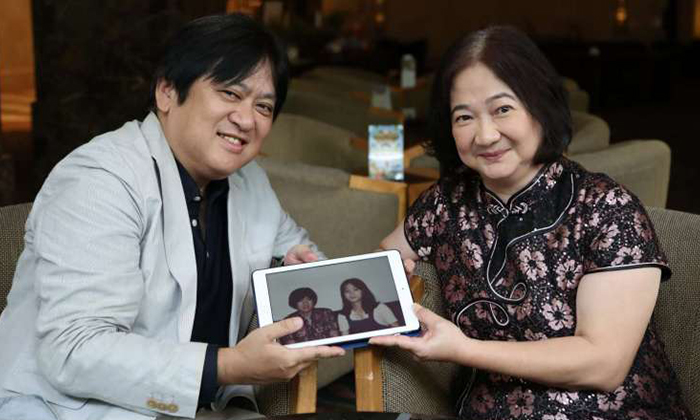 After a chance meeting in Singapore, Japanese businessman Seiichiro Isoda nursed a crush for a Singapore girl for 40 years.

When he was 15 years old, Mr Isoda, who is now married and heads a multinational company, had come to Singapore with his parents. The family stayed at the then Novotel Apollo Singapore, where Ms Chua worked.

After graduating from university, he came back to Singapore to work for six years, and tried to look for his teenage crush.

He had a photo with her but did not even know her name.

Seven members of Ms Chua's family, including her husband turned up to meet Mr Isoda on Oct 16.

They met at the same hotel, now named the Furama RiverFront Hotel.

Mr Isoda recognised Ms Chua immediately and they spent two hours telling each other about their lives, Wanbao said.

"I was very surprised, I've changed so much but he could tell it was me," Ms Chua, now the CEO of a logistics firm, told Wanbao.

She still remembers Mr Isoda, she said, as it was her first job and he was the only guest at the hotel to ask to take a photo with her.

Mr Isoda said that friends advised him to let the crush remain a beautiful memory, but he could not let it go.

"I have too much I wanted to know, and to tell her," he said.

Ms Chua's daughter told Wanbao that she knew her mother was beautiful when she was young, but never guessed that someone would hold a torch for her for 40 years.

"Mum told us how she had many suitors in the past, but we thought they were just stories," Ms Wong said.

Watch the Lianhe Zaobao video below for more.

Related Stories
Dutchman flies to China and waits 10 days at airport for online GF who never showed up... because she was getting plastic surgery
Brazilian guy sells chocolate to raise enough money to marry S'porean girl: 'People thought I was crazy'
Chinese SWAT officers fake relationship for job -- and end up falling in love
More About:
love
sweet
couple
love story
Japanese