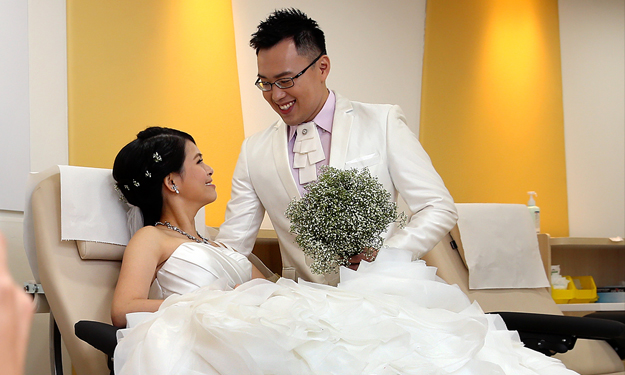 They say marriage is about making sacrifices. And this couple, who will be getting married in September, have been sacrificing their blood, literally, at blood donation centres.

Their first date was to one of these centres to donate blood. That is why they had their wedding shoot last week at a blood donation centre - because that was where they found love.

On their first date in May 2013, stockbroker Ong Chin Hock and nurse Yeo Zhi Wei, both 27, made an impromptu decision to donate blood at BloodBank@Dhoby Ghaut.

The centre is run by the Singapore Red Cross Society together with the Health Sciences Authority.

The couple, who will be getting married on Sept 10, have bought a Build-to-Order flat together.

They will be staying with Mr Ong's family temporarily as the flat will be ready only in 2018.

The New Paper joined the couple at the photo shoot.

Miss Yeo said the centre was significant to their love story.

She said: "I wanted our photo shoot to be meaningful to us. The place had to be unique from other wedding shoots. When we talk about how we first met, we both agreed this place was special because till now, he still jokes that I 'cheated' him into donating blood on our first date."

Mr Ong said it was Miss Yeo's idea to donate blood on their first date.

The couple, who met on May 24, 2013, through a social portal on the Social Development Network, had just finished watching Fast & Furious 6 at the cinema.

Mr Ong said they were at the entrance of Dhoby Ghaut MRT station when they were handed a flier encouraging people to donate blood.

He chuckled: "At first, I thought she was kidding. I hesitated a bit but ended up agreeing to it because I thought it was a good idea."

The time they spent registering at the counter gave them a chance to get to know each other better.

Said Miss Yeo: "We started off chatting about our past experiences donating blood. It was like an ice-breaker."

Miss Yeo, who has been a regular donor since her days as a polytechnic student, has donated blood more than 10 times.

She said: "It is always better to give than to receive."

Mr Ong, on the other hand, had only donated twice before meeting Miss Yeo. But he has become a regular donor because of her.

Miss Yeo said: "It has become part of our lifestyle as a couple. We donate blood together when we go on dates as well."

Mr Ong's mother was shocked they wanted their wedding photo shoot at a blood donation centre.

Said Mr Ong: "But once we explained to our parents the significance of the place to us, she was fine with it."

Mr Cheah said: "Usually, couples who want a unique photo shoot will choose a school or workplace they met at. But to have a wedding photo shoot at a blood bank is very special."

This is the first request the Singapore Red Cross has received for a wedding photo shoot to be held at one of its blood donation centres.

Its secretary-general and chief executive, Mr Benjamin William, said: "We're very glad that Mr Ong and Miss Yeo have chosen the blood bank to be part of their special day.

"Not unlike a favourite sport, a hobby or a visit to the spa, blood donation can easily be a three-monthly routine for all healthy individuals. We hope that many others will follow in their footsteps."

The Singapore Red Cross (SRC) aims to collect 120,000 bags of blood this year.

Mr Benjamin William, secretary-general and chief executive of SRC, said that with new hospitals opening, coupled with a rapidly ageing population, the demand for blood and blood products is projected to grow at a rate of 3 to 5 per cent every year.

He said: "An ageing population means that more will require a blood transfusion due to increased prevalence of chronic diseases, the need for surgery and cancer treatments.

"It also shrinks our donor pool as more of our regular blood donors develop age-related health complications and will no longer be able to donate blood.

"Therefore, it is important that we continue to attract new and young donors like Mr Ong and Miss Yeo to ensure we continue to have sufficient blood to meet all the blood needs of patients in Singapore."

WHERE TO DONATE BLOOD

Mr Azmi Danuri and Madam Ezaida Abdul Rahman held a Star Wars-themed wedding dinner at Hotel Re!, in addition to having in a traditional Malay wedding ceremony.

The couple, who were then in their late 20s, were dressed as a Jedi and Padme Amidala.

They had a Death Star wedding cake and the bridesmaids' dresses were inspired by Darth Vader, Princess Leia and R2-D2.

Their son, who is now about six months old, is called Luq Mohammad Anaqin, after the Star Wars characters Luke and Anakin Skywalker.

Engineer Jai Angel Nama and Madam Adriana Nadine Reyne, then a 31-year-old sales manager, wore what the groom called the best suit of all, their birthday suits.

The result was a photograph of the couple with their backs to the camera, showing off their physique and tattoos.

Mr Jai and his wife used their half-nude picture to welcome guests to their wedding banquet at Novotel Clarke Quay.

This article was first published on April 4, 2016.
Get The New Paper for more stories.