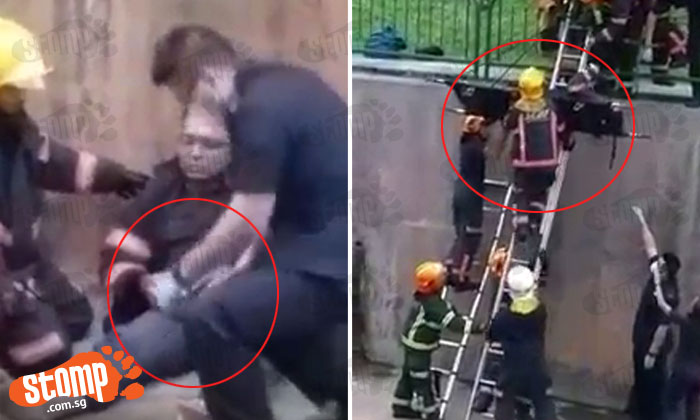 A Stomper was around Block 457 Segar Rd at around 6pm on Saturday (Oct 22) when he witnessed the Singapore Civil Defence Force (SCDF) personnel rescuing a man who broke his leg after falling into the area's monsoon drain.

The video shows the SCDF team first bandaging the man's leg, and later skillfully getting him out of the drain by placing him on a stretcher and carrying him up a ladder.

The SCDF team on land attached a rope to the stretcher, and lowered it down, while the team in the drain carefully placed the man on the stretcher.

Next, one SCDF  team member slowly carried the stretcher up the ladder, with some help from one of the members on land holding on to the rope.

"I'm very proud of the SCDF -- our unsung heroes, for saving the man."

We are so proud of them too!

Watch the video closely and you'll hear the SCDF team getting applauded for their efforts.

An SCDF spokesperson provided stomp with the following details:

"A fire engine, one red rhino and one ambulance were dispatched

"Malay male was found injured in the canal and was rescued by SCDF using ropes and ladders.

"He had sustained leg injuries and was conveyed conscious to Ng Teng Fong General Hospital."