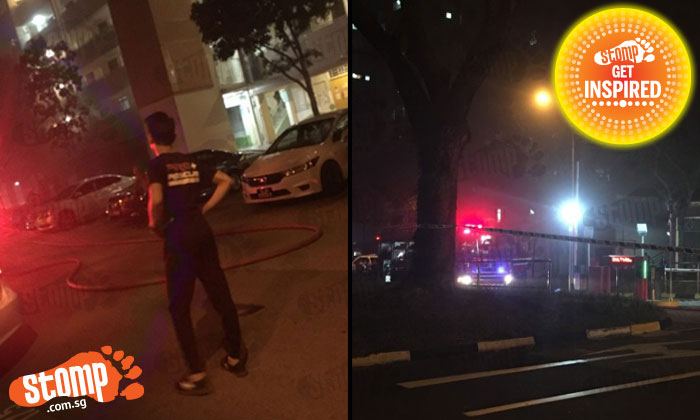 A Stomper was sitting around the Block 519, Bedok North area with her friend at about 7.30pm yesterday (Oct 18) when she smelled something bad.

She then noticed a lot of black smoke coming from the block's direction.

According to the Stomper, an off-duty NSF fireman was at the scene helping out the Singapore Civil Defence Force (SCDF) as well.

Photos from the Stomper show the guy wearing a 'Fire Rescue' shirt.

"He saw the fire from afar and immediately sprung into action, helping to evacuate people from their homes, and helping to set up the hoses.

"I'm proud of the SCDF for training their boys well and proud of this NSF. Well done!"

According to The Straits Times, the fire broke out at PAP Community Foundation kindergarten at Block 519, Bedok North Ave 1, that evening.

A spokesperson from SCDF provided Stomp with the following statement:

"The fire involved an air con unit, and was extinguished by SCDF using one water jet.

"Approximately 40 people were evacuated from the block prior to SCDF’s arrival.

Related Stories
My dad, the hero: Off-duty fireman comes to the rescue of child locked in lorry at Woodlands Blk 302A
Watch chilling SCDF rescue of elderly man who fell out of window of Tampines Block 410
You'll be left inspired by how Singapore's everyday heroes go all out to help others
More About:
rescue
kudos
get inspired
inspiring
scdf
firefighters