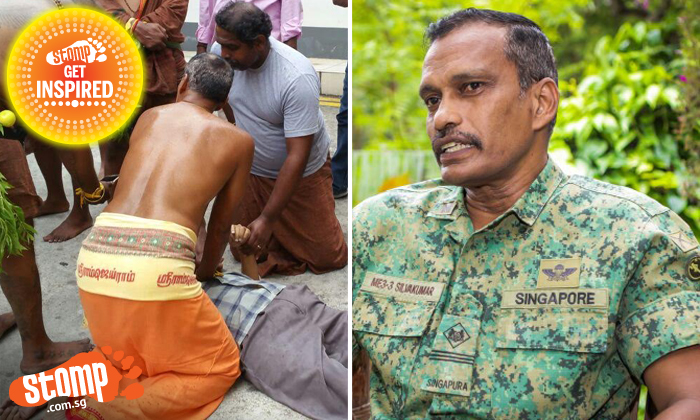 One of the group of men who administered CPR to an individual who had collapsed near the Shell station at Serangoon Road received the SCDF's Public Spiritedness Award.

The group of devotees were on their way to the temple on Oct 23 when they came across a man who had fainted and was lying on the ground.

Stomper Nathan alerted Stomp to the incident after his cousin saw them performing cardiopulmonary resuscitation (CPR) on the man.

A post on The Singapore Army Facebook page later revealed that one of the men in the group was 58-year old Signals specialist ME3 Silvakumar s/o Utharapathy.

He was on his way to the temple for the fire-walking ceremony when he spotted the man who had fainted.

He administered CPR while waiting for the ambulance to arrive on the scene.

In the post, Mr Silvakumar mentioned that he had learned CPR in 1982.

But he also added that while learning the skill was one thing, but having the presence of mind to help in actual emergency is a different thing altogether.

The SCDF presented the Public Spiritedness Award to Mr Silvakumar in recognition of his commendable efforts.