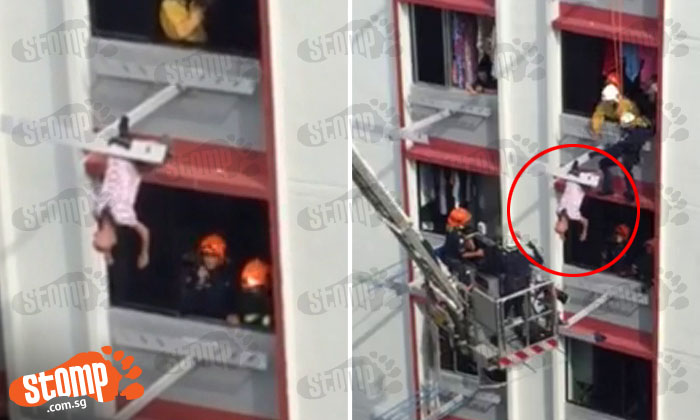 Stomper Bert sent Stomp a video showing SCDF personnel rescuing an elderly man who was stuck on a clothes rack after falling out of an HDB unit on the 8th storey of Block 410 Tampines Street 41.

In the video, the man can be seen hanging precariously from the metal rack as firemen tried to bring him to safety from HDB units above and below his flat.

At one point, a fireman can be seen rappelling down from a HDB unit on the 10th storey to free the man from the clothes rack and guiding him onto a ladder that was being deployed by personnel at the foot of the block.

"SCDF was alerted to a rescue incident at 410 Tampines Street 41.

"An elderly man was brought to safety from the 8th floor by SCDF using the combined platform ladder.

"He was conveyed to Changi General Hospital in a conscious and stable condition."

Good job to all the personnel involved in the rescue!