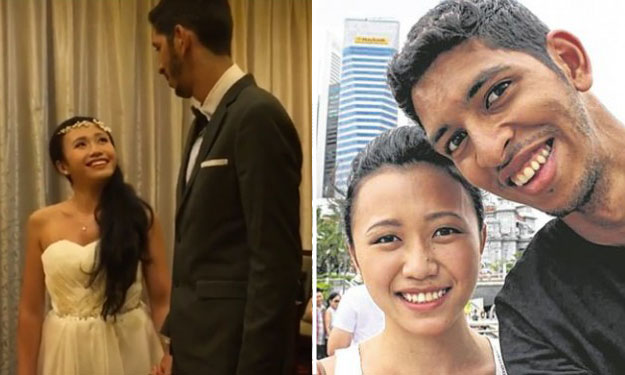 Love certainly goes the distance for one couple. Even if for one Brazilian guy, it meant selling 10,000 Brigadeiros (Brazilian chocolate delicacies) to raise enough money to marry the love of his life in Singapore.

29-year-old Miquéias A. W. Rohr from Brazil met Singaporean girl Rebecca Ang, 25, while they were studying in Australia three years ago.

The couple got married in Singapore last Wednesday (Apr 20), with Miquéias showing a live broadcast of his ROM. Their story even made the headlines on Brazilian news sites.

According to Lianhe Wanbao, Rebecca shared that Miquéias was a short-term exchange student and had to finish his last year of study back in Brazil. They had only been dating for 24 days before they had to part.

They made a pact to wait for Miquéias to graduate back home, before going to Sydney together to further their studies.

In order to keep their promise to each other, he worked two jobs while studying -- doing graphic design and working at a stationery shop.

However, as the expenses for studying abroad was too so high, he thought of another avenue to make more income: The chocolate balls.

With the help of his mother, he made the first batch of Brigadeiros. He sold them at his hometown and went door-to-door to increase sales.

Many people admired his perseverance, but others showered him with scepticism.

"When they heard I was doing this for a girl in Singapore, they thought I was crazy. They advised me to look for a girl in Brazil. I told them, 'No, I only want her.'"

The chocolate balls only earned him ten cents each, but his devotion soon made the news in Brazil. He finally raised $5,000 in half a year from his hard work and some donations from kind-hearted souls.

Miquéias finally got to Sydney, but little did he know that his visa would be rejected. Not only could he not study in Sydney, his school fees could not be refunded immediately.

At that time, he could not even afford a ticket back home to Brazil.

"At that time, we had been in a long distance relationship for one year. The thought of having to wait even longer made me want to cry.

"We met Kuala Lumpur airport and had a serious discussion of whether to break up or continue this relationship."

The pair decided to give it one more try.

In order to not overstay at any country, Miquéias had to keep moving around. First, he stayed in Singapore for two months. Then he flew to Busan to work, flew back to Sydney, back to South Korea and so on...

This went on for 16 months.

Before proposing to Rebecca, Miquéias asked for her father's permission.

Rebecca's father had some reservations about his daughter falling for a Brazilian boy, but was moved by his sincerity after meeting him and agreed to let them marry.

Miquéias did not drink and did not like to party, which set him above many guys.

The Ang family started to love him after his several visits to Singapore, where they got to spend Chinese New Year with him.

"He actively tries to assimilate into my family's culture, and even wants to learn Mandarin well to talk to my grandmother," Rebecca revealed.

"I was worried about our future at first, and took some time convincing myself [to accept his proposal], but I saw his sincerity and how much he sacrificed for me. I knew we would go on."

Miquéias started a GoFundMe campaign to raise funds to buy tickets for his parents to come to Singapore to see his engagement. Unfortunately, that campaign did not raise any money.

They left for South Korea for their honeymoon on Apr 23.

The newlyweds are intending to settle down in Brazil, where Rebecca can become a permanent resident. However, they are not putting off the idea of returning to Singapore.