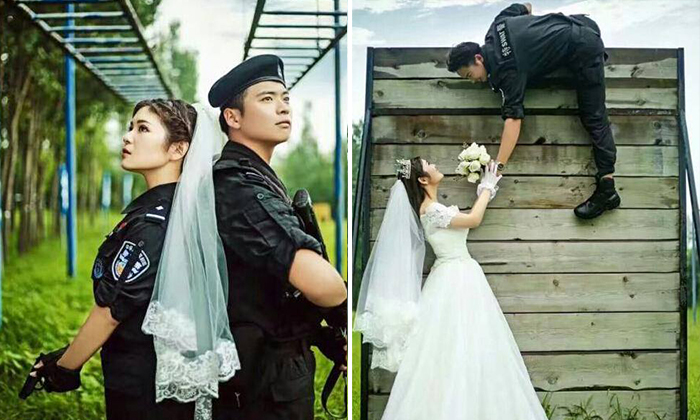 They say love strikes in the unlikeliest of places, and that sure happened to Chinese Special Weapons And Tactics (SWAT) team members Yang Liu, 26 and Li Jisheng, 27.

Part of Hebi city's SWAT team, they were instructed by their seniors to pretend to be a couple when they carried out their operations.

Little did they know they would end up falling in love with each other and ended up tying the knot.

Their story went viral after their wedding pictures featuring them in their combat attire swept the Internet.

The romantic photos featured the couple in their uniforms as well as in their wedding gear.

According to CCTV News, the bride said “The reason for taking wedding photos in army style comes from the fact that this is how we knew each other and fell in love, and I think it showed our authentic lifestyle as members of the SWAT team,”

In the photos, Yang pairs her combat gear with a wedding veil while Li can be seen scaling a wall to present his beloved with a bouquet of flowers.