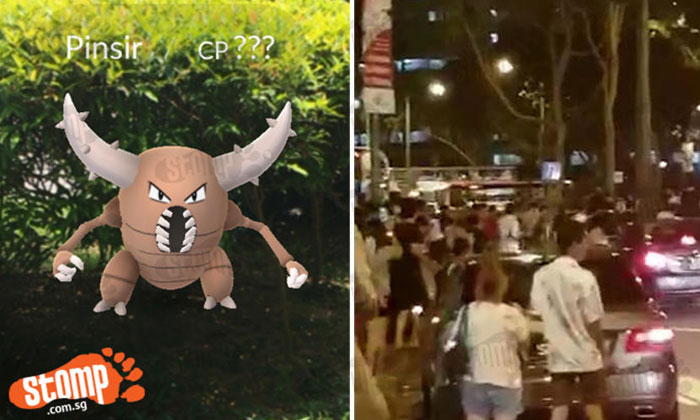 Power banks have been flying off the shelves here - probably thanks to Pokemon Go.

"Due to the Pokemon Go craze, Challenger has noted a huge spike in the sales of higher capacity power banks for faster charging while people are out playing the game," she added.

While the free-to-play game will not increase data usage significantly, keeping it on while moving around to capture Pokemon or find PokeStops drains battery life as it uses several functions such as location-based services and augmented reality.

Singapore has been hit by the Pokemon craze since it was launched last Saturday. Hordes of players glued to their devices have been spotted at parks across the island - right up to the wee hours of the morning - trying to capture much vaunted digital creatures such as Snorlax, Porygon and Lapras.

At Courts Singapore, sales have doubled in the first half of the month, as compared to the same period last month.

Its chief executive officer Stan Kim said: "With several of our stores located near PokeStops throughout the island and Courts Megastore being a Pokestop itself, I believe we can say with confidence that this is due to the combined impact of the long National Day weekend and Pokemon Go."

Lamch & Co's director Catherine Ho, whose company distributes such devices to shops here, said: "We have definitely seen a spike in orders... from the various channels in Singapore. In some cases, orders have tripled, specifically for pre-charged, fast-charge and higher capacity power banks.

"Our vendors, who also cover the Japan and Hong Kong markets, gave us a heads-up on the spike in demand (before) Pokemon Go even announced its arrival in Singapore, so we were well aware of what to expect."

"The channels are definitely ordering in response to the spike in demand, and we do often get requests for immediate top-up of stock."

A shop attendant at Box Boss said power cable sales have tripled ever since the game was launched.

Online retailer SK IT Solutions, which sells power banks through sites like Qoo10 and Lazada, noticed a 10 per cent increase early this week.

It is all good news for financial planner and avid player Bryan Lim. He never leaves home without a power bank in his bag.

The 25-year-old, who keeps the Pokemon Go app on during his daily commute, sees his phone battery deplete by 40 per cent in just half an hour.

He told The New Paper: "The power bank is really a lifesaver."

Related Stories
More Pokemon Go madness at Hougang and Toa Payoh: Trainers dash across road and make a lot of noise at 1am
Pokemon trainers occupy parking lots at Hougang Ave 10: One even challenges resident to call the police
Playing Pokemon Go for 8 hours will use up 25MB of mobile data: Estimates
Marine Crescent resident will place a Pokemon lure for every $1 donation
'Enterprising' netizen offers to run around Bedok or Tampines stadiums to help you hatch Pokemon eggs... if you are willing to pay
More About:
pokemon