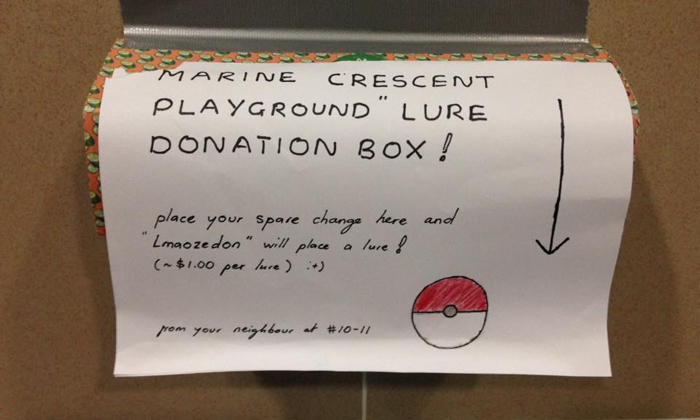 Looking for more Pokemon to catch? A Marine Crescent resident will help to drop some lures... in exchange for your spare change.

Photos that Stomp received show a 'donation box' that had been set up at 28 Marine Crescent by a resident who goes by the username of 'Lmaozedon' in Pokemon Go.

Calling it the 'Marine Crescent Playground Lure Donation Box', the resident wrote that he or she would place a lure for every ~$1 received.

In the game, a lure is an item used to attract Pokemon to a particular area for 30 minutes so that 'trainers' can catch as many of them as possible

So far, it seems that only one lure has been placed for a 90-cent donation.

It is unclear who or what the 'donations' received are meant for, or how they will be used.

However, the resident's plan does not seem to be working very well.

It is understood that just today, a half-eaten curry puff and an egg have been found in the donation box.