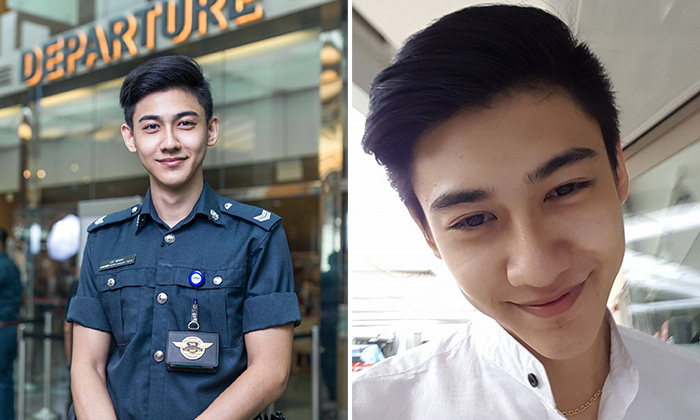 He is 22-year-old Lee Minwei and is a Corporal in the Auxiliary Police Force at Certis Cisco.

He achieved sudden Internet fame after his photo was posted on SGAG.

"There are times when tourists ask me to take photos with them, but I never expected something like this to happen. It was really quite a shock," Lee said.

He attributed his good looks to his parents' genes, saying that his mother "has really beautiful eyes".

Lee, who has three other siblings, commented that his younger brother could be slightly jealous.

He added: "I think my three siblings and I are all attractive in our own way."

Although Lee is single at the moment, he is not looking for a relationship as he wants to focus on his career.

"I believe things will happen naturally if it's meant to be, and if the right girl comes along," he said.

See Stomp's video below about 10 beautiful people in Singapore.

Related Stories
Meet the awesome... and handsome soldier who helped mum carry little girl so they could watch NDP
Watch 'yandao' policeman's wedding video: His pretty wife is from SPF too
We've found the world's most beautiful math teacher thanks to this viral video
More About:
handsome
police officer
airport
Changi airport