Meet the awesome... and handsome soldier who helped mum carry little girl so they could watch NDP 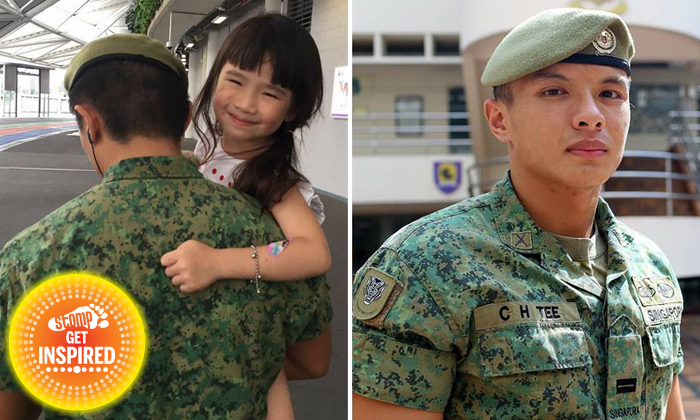 The soldier who made waves online for helping a woman carry her young daughter at the National Day Parade (NDP) preview show has been identified by the Singapore Army.

An earlier Stomp article reported that Facebook user Kenny Leo had commended the soldier for helping his wife and daughter on July 23.

The pair were supposed to watch the NDP, but were slightly late and at the wrong side of the stadium.

Hence, the soldier helped to carry the little girl as her mother was holding stuff and it was quite a long walk to the right entrance.

His battalion is involved in packing and distributing the funpacks as well as spectator management for this year’s NDP.

"Initially surprised to find out that he had been “Stomp-ed” for something he wouldn’t think twice of doing again, he shares, 'I'm definitely glad to know that my actions have brightened someone's day'."

"Woah.. I didn't know my post can actually reach here. In any case, thanks so much LTA Tee for your help that day. It really did brighten our day. And from the photo itself, I guess you can tell my daughter enjoyed her 'free ride' as well."

To this, LTA Tee replied:

"Mr Leo, I was surprised by the picture captured too. Want to thank you for showing faith and trusting us to do our job. Hope your kid and wife had a good show that night :)"

Check out the full posting and hear more from LTA Tee by browsing the gallery.

Related Stories
Kudos to awesome soldier for helping mum carry her little girl so that they can watch NDP
More About:
inspiring
heartwarming
kudos
soldier