Watch 'yandao' policeman's wedding video: His pretty wife is from SPF too 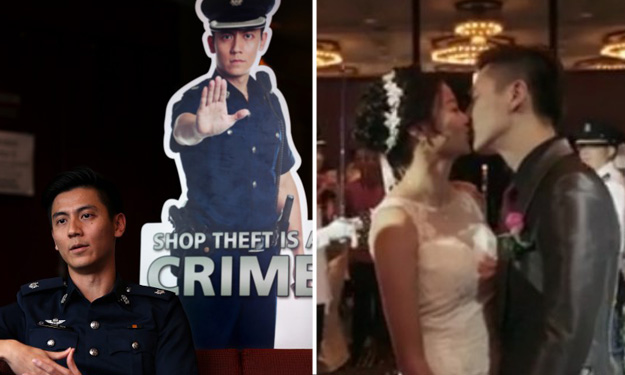 Singapore's most popular handsome policeman has married his sweetheart, as shown in a romantic wedding video.

A video was uploaded on Facebook yesterday (Apr 3) by Ark Moments.

The couple's wedding photos and video went viral soon after they were posted on Facebook.

Mr Ryan Koh, 33, is probably the most famous face for the SPF, as he can be seen at the entrances of many shops in the form of a "shop-theft" standee.

Turns out his pretty wife, Sabrina, is also a policewoman herself.

According to the video campaign, the man who many has come to know as the 'yandao' policeman, also has a great voice.

He serenaded Sabrina with his surprise song during the evening banquet. With the dinner graced by many from the police force, his colleagues stopped him with his signature pose during the SPF slow march.

The couple are now on their honeymoon.

Watch their wedding video below.

We are glad to share with you the wedding of Singapore’s most famous constable and his wife, Sabrina, who happens to be a policewoman herself.If you find Ryan familiar, that’s because you probably seen his hugely popular cardboard standee at one of the shopping malls or public places, acting as the face of the police’s anti-crime campaign.What many of us didn’t know was that he had a great voice as well, as he serenaded Sabrina with his surprise song during the evening banquet. With the dinner graced by many from the police force, its no wonder that his colleagues stopped him with his signature pose during the SPF slow march. It was a wonderful day of celebrations and our sincere congratulations to both Ryan & Sabrina!