Elderly Chinese man who was given CPR by Hindu devotee dies 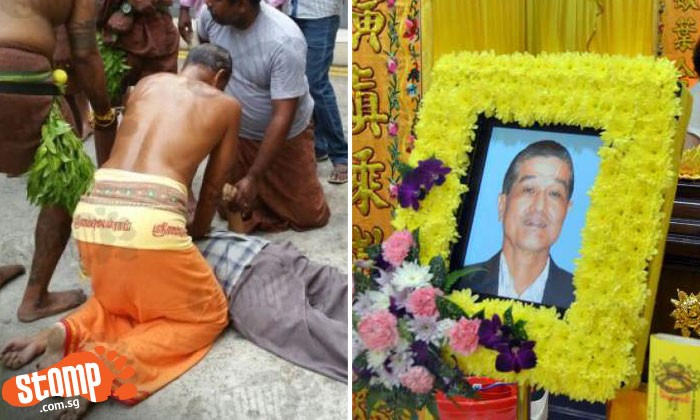 A 68-year-old man, Mr Ong Peck Hock, who was helped by Hindu devotees after collapsing near a Shell station, along Serangoon Road, on Sun (Oct 23), 4pm has died.

Mr Ong was showing signs of response before he was taken away in an ambulance but doctors later told his wife, Mrs Bessie Ong, that he had "a slim chance of survival" due to a lack of oxygen to his brain.

Mrs Ong said that her husband suffered two heart attacks before and after the second attack in 2007, he was told by the doctor that he had only six months to live.

The prediction turned out to be wrong.

But Mr Ong, who also had diabetes, had started developing a bad cough two weeks before his death, according to his wife.

Stomper Nathan alerted Stomp to the incident on Sunday.

The Singapore Army then confirmed that it was Mr Silvakumar, a 58-year-old army military expert, who performed cardiopulmonary resuscitation (CPR) on Mr Ong.

The SCDF also presented the Public Spiritedness Award to Mr Silvakumar for his honourable act on Wed (Oct 26).

According to The Straits Times, Mr Silvakumar paid his respects at Mr Ong's wake at Block 107 Towner Road with his son, along with around 10 devotees who tried to help Mr Ong.

Mr Ong's wife said, "I appreciate and salute them for helping to revive him.

"He was very frugal, so he would make it a point to compare the prices.

"He was very, very caring. Up till his last day, he would worry about our son, and whether he has eaten his meals.

"He would prepare dinner for us every day without fail. I never missed his dinners."

The couple have a 25-year-old son, who recently graduated from university.